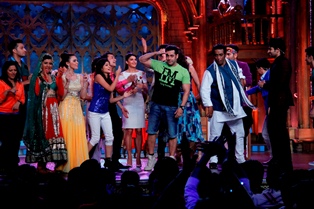 Cera India's Best Cinestars Ki Khoj powered by Glam up' - Zee TV's acting talent hunt show in search of the most versatile, talented cine stars unveils its top 12 contestants this coming weekend ... what's more, the grand gala episodes that showcase exciting acts by each of the Blockbuster Baarah' see superstar Salman Khan with his co-star Jacqueline Fernandez, bringing down the roof with their crackling chemistry and masti on the sets. The duo promoted their latest flick Kick and added a sprinkling of stardust and glamor to the first gala episode unveiling the Blockbuster Baarah.

These top 12 were chosen by the judges of the show - Anurag Basu, Victor and Sonali Bendre from a nationwide hunt across 18 cities and have been going through rigorous training and rehearsals to prove their mettle and fight it out for the coveted title.

It was pure hysteria when the contestants got to know that their favourite actor Salman Khan will be amidst them to announce the Blockbuster Baarah. The girls were seen swooning over him and scuffling amongst themselves over their heartthrob.

The ones who made it to the top 12 and will now be seen embarking on a journey of grooming at the hands of some of the film fraternity's most sought after experts, performing across different genres and styles of acting and fighting it out for the title of India's Best cine star. So here's a look at the Blockbuster Baarah':

19 year old Prakruti Mishra hails from Bhubaneshwar - the ravishing daughter of a music composer for Oriya films and his playback singer wife. She's done a few regional films herself but her heart races for Bollywood. Her idol is Kareena kapoor ever since she's been told that her jawline looks a lot like Bebo's!

Chandigarh's Abhimanyu Kak has emerged from being the youngest RJ of India (at a tender age of 14!) to having a rock band of his own in Delhi to now swiftly climbing popularity charts as one of the most confident, versatile & promising contenders for the title of Cine Stars Ki Khoj.

Haryana's Meenu Panchal had made quite a mark as a dancer on Zee TV's Dance India Dance Season 2, having secured herself a position in the Top 8. She's done a number of commercial ad films ever since and she reveals it would be a dream role to play a girl trapped in the flesh trade like Chameli, Chandni Bar or Pakeezah as she is fascinated by their grit and resolve to survive.

Muradabad's Syed Mamoon left his accountant job when he found his true calling - acting. Hailing from a modest financial background, he wants to make it big so he can provide for his wife, his 1 and year old son and his mother who has had to single-handedly raise him and his siblings since his father separated from them.

Hailing all the way from Azerbaijan, the rare beauty Okasana Rasoulva is making heads turn with her striking good looks, poise and command over Indian dance forms. The daughter of an academically inclined family where both mum and dad are engineers, her parents are not thrilled by her choice of career but are supportive nonetheless! She is already a star back in her country and does shows and concerts showcasing Indian dance forms and styles. Her idol is Madhuri Dixit and she dreams of playing a role in a romantic film that allows her to dance her heart out. She's got a giant-sized crush on Shah Rukh Khan!

Punjab da puttar Saurabh Bharadwaj is a handsome hunk and a complete Casanova. He has 9 official girlfriends and no count of the girls he's proposed to! He plays the guitar and the saxophone, loves driving swanky cars and plays X-Box. He's trained under Kishore Namit kapoor and Barry John. He looks up to Irfan Khan but his dream role is Randeep Hooda's part from Highway.

Mumbai ka mulga Abhishek Nalawade, is amongst the rare breed that says they do not want to be a hero, but an actor! His father was subjected to a lot of taunts when he left studies and started training under Shiamak Davar and later joined him as a trainer himself. Today, Abhishek is a black belt holder in Taekwando and does many a cameo roles that come his way. SRK is his idol!

The differently abled and super talented Kartik Vyas from Allahabad has raced way ahead of so many other aspirants with no physical challenges on the sheer merit of his creativity of expression, body language and flair for mimicry. Not once has he let his hearing and speech impairment come in the way of putting on magnificent performances. He's known as the mimicry king as he does amazing rip-offs of popular actors like Salman, Aamir Khan, Shah Rukh, Ranbir Kapoor and so on.

But leading the pack was Uttarakhand which gave the show as many as four contestants in the top 12,

Dehradun girl Sonam Bisht is the daughter of a civil engineer. A complete charmer, everyone's talking about her eyes! There's something riveting about them, clearly! This one's going to have trouble shooting at the beach or in a pool as she'd almost drowned once while learning to swim!

22 year old Sheetal Chauhan from Dehradun is pursuing her Masters in English Literature and that, she says, is her backup plan. But the smart girl has always had a thing for acting. She's dabbled in hospitality and been a cabin crew too - but acting beckoned. She's quirky enough to say that Nawazuddin Siddiqui's role from Gangs of Wasseypur is her dream role. Let's see how she gets that look right!

19 year old Aman Joshi is from Dehradun  and mother is a school teacher  while father works in the soil and water department. With no filmy connections, here's a young man who's found his calling in acting and wants to make it big on his own steam - with just his good looks and talent as the ammunition in his arsenal!

The effervescent Bhawna Dhoundiyal from Uttarakhand is about to break a lot of hearts as she's already married. Her hubby, in fact, fell in love with her on seeing her act on stage. The daughter of a retired army officer, she cannot thank both her maayka and sasuraal enough for being utterly supportive of her love for acting!

Salman Khan and Jacqueline Fernandez will also be seen shaking a leg with the contestants, making them do splits and imparting some acting tips to the budding talents.