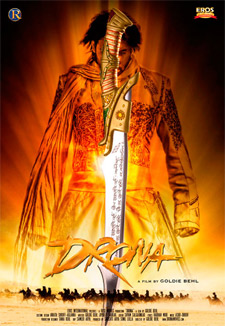 Have you been Drona-fied yet? Everyone from Producer Shristri Arya and Director Goldie Behl to the very popular, talented actor Abhishek Bachchan have been proactively spreading the message online about their next eagerly anticipated film Drona. In this day and age of the cyber space, the Drona team seems to have jumped on the new media bandwagon as promotions for the movie are spread across all arenas of the World Wide Web including an official Facebook group and frequently updated blog site.

Recently the lead actor Abhishek Bachchan uploaded pictures from behind the scenes that were taken during the shooting of the film on to the Drona Fanclub. This direct interaction of the makers and actors from the film has caught well amongst the audiences as the number of people joining the fan club continues to increase. With another four months to go before the film release, we wonder how long the list of those that have been Drona-fied will be!

Watch out for Drona releasing on October 2nd. as the versatile actor Abhishek Bachchan brings to life the one of a kind character of a superhero out on a mission to save the world!
Featured Video