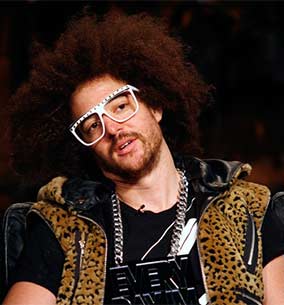 Stefan Gordy, known by his stage name RedFoo, delivered what he promised by turning the capital and Mumbai into "party planets" recently. While the desi crowd enjoyed his maiden performance in the country, he says Indian beats are a popular part of the American culture.

The US electronic dance music disc jockey and rapper known as the co-creator of rapper duo LMFAO, RedFoo is no stranger to Indian music. In fact, he enjoys it.

"My mom was into spiritual stuff and yoga. I got a bunch of CDs of Ravi Shankar (late Indian sitar legend) and started listening to the rhythm and the hip-hop people would sample stuff. Indian rhythm...it's been all over American culture," RedFoo, who came here on a two-day tour, told IANS.

Organised by Metigon Enterprises Pvt. Ltd., his concert was held at Kingdom of Dreams Gurgaon May 10, and then he performed in Mumbai the following day.

He might have first set his foot in India just a few days back, but he has heard a lot of stories about the country and is happy that they indeed are true.

"You grow up in America and hear stories about India. You got the spiritual side and you got yoga and food...that part is true. The food is amazing...the spicy vegetables and curries. I've always heard that people here are so nice. It's true. Everybody here is so nice," said the music expert, who sports a unique Afro hairdo.

He says he likes Bollywood music too and hopes to work with Indian artists someday. There were rumours that he has been approached by Bollywood filmmaker Sajid Nadiadwala for his directorial debut "Kick".

RedFoo found the traffic here to be "crazier than in New York City" when he rode a bike on the street.

"I also saw a wild boar walking on the street minding his own business," said the party rocker, who wants to visit the Taj Mahal -- if not this time, probably the next time when he will hopefully return to India to perform with his nephew and the other half of LMFAO - Skyler Gordy, better known by his stage name Sky Blu.

The duo, who churned out hits like "Party rock anthem" and "Sexy and I know it" in 2011, is currently on a hiatus, but there were rumours that the rappers would come together for an India tour. However, later it was announced that they would perform separately.

"I don't know why they said we were coming together. We are still on a hiatus. I think that party music will live forever. I am just a vehicle for the party music...Anytime you get original people together, it's gonna be very exciting," he said.

He didn't rule out a reunion with Sky Blu.

"Maybe in future that will happen. Right now, we are focusing on our solo careers," said RedFoo, who grew up surrounded by music.

"The feeling of it, being able to put together music and expressing what I am feeling...I have been influenced by music. I grew up listening to blues, jazz and all," said the musician, who enjoys the EDM genre specifically.