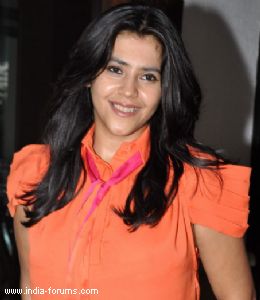 Supernatural thrillers with urban legends like Hollywood's "Twilight" saga are still a far cry in Indian filmdom, says Ekta Kapoor, who is introducing a new era of fear with her forthcoming film "Ek Thi Daayan" and says it is fun to do something no one has done before.

When it comes to variety, Ekta, as a producer, has made films on varied subjects - a biopic "The Dirty Picture", real-life based story "Ragini MMS" and underworld drama "Once Upon A Time In Mumbaai".

But supernatural thriller is not new for Ekta, who has visited the genre for her TV shows.

"I did 'Mano Ya Na Mano' 10 years ago, which Irrfan had anchored. I did a lot of TV with supernatural. I don't know why that genre never got replicated into movies. We had times when we had films on supernatural genre, which were experimental at that time. We don't have them now," she said.

Ekta first made it big on the small screen by producing shows like "Itihaas", "Kyunki...Saas Bhi Kabhi Bahu Thi" and "Kahaani Ghar Ghar Kii". She became the game changer and won the title of TV czarina.

Later she turned to the silver screen and by her own admission, no one took her seriously. But she pursued her dreams with gusto and made a mark by producing successful films.

"People call me regressive, some call me progressive, but I don't take these comments seriously. If you like your viewers and get the best product for them, nothing else matters," said the filmmaker who keeps her thinking cap on.

Not only that, Ekta also believes in coming out of her comfort zone to make something new and admits the unknown path is scarier as well as exciting.

"I personally believe it's always fun to do something that no one has done before. Unknown path is always scarier as you don't have a comfort zone, don't know how exactly the viewers will take your product. But at the same time, the excitement is huge," she said.

Talking about "Ek Thi Daayan", she said that it is not "a typical film".

"We are dwelling with a new era of fear and it's always fun because we are actually into something where you don't know how audience will take it," she said.

Her other forthcoming projects are "Shootout At Wadala". The stylishly shot crime thriller is based on Mumbai Police's first gunfight where they shot down gangster Manya Surve, played by John Abraham.

Then there is "Shaadi Ke Side Effects", a comedy starring Vidya Balan and Farhan Akhtar. The film is a sequel to Rahul Bose- and Mallika Sherawat-starrer romantic comedy "Pyaar Ke side Effects".

(Uma Ramasubramanian can be contacted at [email protected])

Farhan Akhtar helps families affected with Covid-19 in UP; Pledges to ...