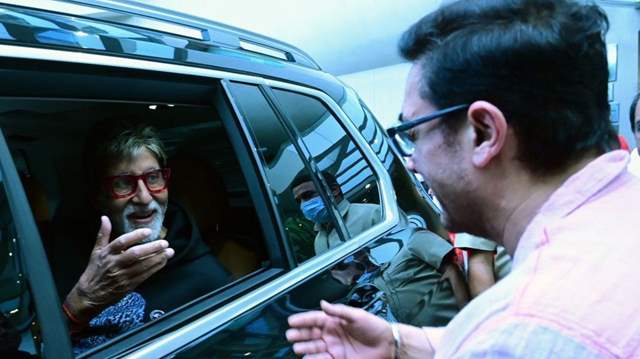 Amitabh Bachchan is one of the mega stars who is adored and respected not only by his fans but each and every member of the fraternity. The actor enjoys an enormous fan following and getting just a glimpse of the actor is like a huge dream for many.

Amitabh Bachchan is an avid social media user and he often shares quirky pictures and videos on his social media handle. Recently, the actor took to his Instagram account and dropped a picture of him candidly catching up with Aamir Khan while calling him a legendary person and giving brief details about their meet to his followers.

In the picture, we can see Bachchan Sir in is car, while Aamir is standing outside the window as they have a candid met and greet. The caption of his post read, "… and as I am about to leave .. a knock on my car window and it’s Aamir .. gosh ! So many legendary friends in one evening ..😀😀👏."

For the unversed, Aamir khan and Amitabh Bachchan were seen together sharing screen space in the film Thugs Of Hindostan. While the film couldn't perform well at the box office, fans loved their camaraderie throughout. The film also featured actress Fatima Sana Shaikh.

Talking about their current work engagements, Amitabh Bachchan has a boat load of projects lined up. He will next be seen in the film Brahmastra helmed by Ayan Mukerji. The film also features Alia Bhatt, Ranbir Kapoor, Mouni Roy and Nagarjuna. Apart from this he will also be a part of Sooraj Barjatya’s Uunchai alongside Parineeti Chopra, Boman Irani, Anupam Kher, Sarika, Neena Gupta and others. Big B also has Goodbye alongside Rashmika Mandanna and Maidaan.

Aamir khan on the other hand is gearing up for the release of his film Laal Singh Chaddha. the film also features Kareena Kapoor, Mona Singh and Naga Chaitanya in key roles. The film will hit the silver screens on 11th August 2022.