Prachi Desai who got name and fame on platter courtesy Ekta Kapoor's Kasamh Se is moving up the success and fame ladder with opportunities falling into her lap, the latest being debut opposite Farhan Akthar. Telly Buzz talks to teenage actress about her permanent passion, dance which gave her Jhalak Dikhhla Jaa and made the industry notice that there is more to Prachi than just being Bani. 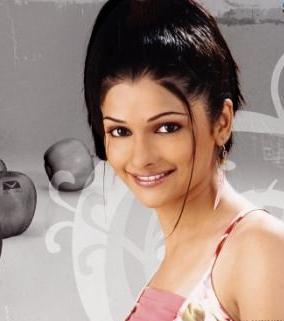 Featured Video
Which dance do you love the most and which was the toughest?

I really had a blast doing the Cha Cha. And I found the cabaret round the most difficult.

Why is it that the songs you choose are not very hot?

I am not comfortable with those type of dance movements and costumes. The choice of song is secondary and what counts is the quality of dance.

Why did you refuse to wear certain costumes for the cabaret round?

My image and up bringing does not allow for it. One does not need to shed clothes to look good on the floor.

Who among the top 4 have a chance to win?

The competition is very severe now. All have an equal chance.

On whose elimination did you feel hurt the most?

Obviously mine. Seriously speaking, we dread that Saturday afternoon when somebody has to go. Unfortunately, we don't get much time to even console the ejected Jodi, for we have to immediately prepare for the gala round.

How has Jhalak helped you?

People now know me as Prachi and not just Bani. Taking part in this reality show has made me very confident to try out new things. Earlier, I would regard dance as punishment, but now I eagerly wait for the next rehearsal.

Which has been the best moment so far ?

When I was brought back in the wildcard. This shows how much I am loved.

Your equation with choreogpraher Deepak?

He is superb. When I first signed on, I was scared for I did not want a choreographer who would scream at mistakes. But Deepak is very patient and know what works and what does not work for me.

Will you share your prize money with him if you won?

We are not bound to give any money, the channel rewards them separately. But I would surely thank him in some other way.

That would have to Ashriwary Rai and Hrithik Roshan.

Did Jhalak play a role in you bagging your film opposite Farhan Akhtar?

Why don't you ask them what inspired them? I was just plain lucky to bag this great oppurtunity. May be somebody opted out at the last minute.

Now that you have entered bollywood, would you quit TV?

No way, I love TV and would always remain part of this great industry which has given me everything.

If you get a balliye soon, will you try Nach next time?

That's a naughty question. Let me find a balliye first. But for the moment, Jhalak rocks.

14 years ago A great dancer!
And a very bubbly person!
She's too kewl!

14 years ago thanks that she doesnt leave tv industry

14 years ago haha.....last one was just ;) liked the interview...plain honesty there!