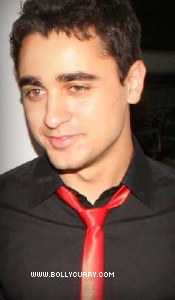 Looking to replace Ajay Devgn?  Imran Khan wouldn't be our first choice considering the stark difference in their images.

However, Vishal Bhardwaj, who had recently announced casting Ajay Devgn opposite Anushka Sharma in his next movie, has finalised Imran Khan as his new male lead when Ajay mysteriously opted out.

The comedy flick, titled Matru Ki Bijlee Ka Mandola, will see the pairing of Imran and Anushka for the first time. Nothing has currently been revealed of the script, although Vishal has admitted that it will now be tweaked to fit Imran's image better.

Imran is currently busy with two upcoming movies - Pasand Apni Apni, and Ek Main Aur Ekk Tu which is due to release on February 10, 2012.

It's an interesting choice to make, but we're sure Imran will live up to all expectations.