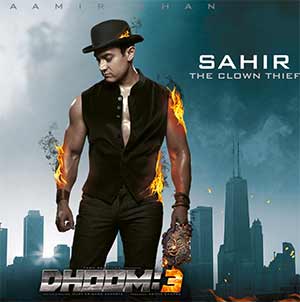 Imran Khan feels that his uncle and superstar Aamir Khan-starrer "Dhoom 3" has the potential to set a new box office record.

Directed by Vijay Krishna Acharya, "Dhoom 3" is set for a Dec 20 release and expectations are high from the new offering by Yash Raj Films, especially because the first two instalments were blockbusters.

"I think, there will be some new club. Rs.200 crore club has already been made, and for this film there will be a Rs.300-Rs.400 crore club," the 30-year-old told reporters Monday at a Bru coffee contest event here.

The actor, who himself performed some daredevil acts in "Luck" and even burnt his eyelashes and skin while doing action sequences in the 2009 release, says "Dhoom 3" stunts are by far the best.

"I am very impressed with the action sequences. As a guy I like action films, but till today I have not seen any Indian film with such amazing standards of action scenes. I was very impressed," said the actor.

In "Dhoom" and "Dhoom 2", the action was sleek and notches above contemporary releases.