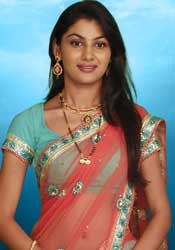 Sriti Jha who is presently seen in Imagine TV's Jyoti, would soon be seen essaying the role Sandhya an unfortunate girl who has lost her eyesight in soon to be launched show Rakt Sambandh.

Tell us something about your character?
I enact the role of youngest daughter amongst the 5 sisters. And my on screen name is Sandhya Savratkar. Being the youngest she is much pampered and unfortunately she has lost her eyesight but that doesn't matter much to her. She is independent, well educated, and happy and loves her father, sisters a lot.

What made you to take up this role?
I'm never in a hunt of specific roles I take up whatever best comes up my way. And I found this character very challenging I don't know if I'm doing it well but I hope to do it. Also I'm enjoying it because the story, cast as well as my character is unique and interesting.

The story sounds very inviting as in there is always an anxiety to know what would happen next.

You will be seen in yet another physically challenged role so was that intended?
No not at all (laughs) it's just that I'm blessed to have got an opportunity to portray different characters every time and I'm enjoying this new learning experience. And hope I stay away from this normal girl character.

Do you think a physically challenged character offers better potentials as an actor?
See basically all the characters are normal it is we humans who tag it to be abnormal. For instance Sandhya she doesn't find anything missing in herself, she is self-sufficient she has no regrets of losing her eye sight. So it's just a part of her personality and one has to live with it.

This show is based on a Maharashtrian background so could you brief us something more on that?
Yes the family depicted is essentially Maharashtrian but they have a very urban back drop they are not orthodox so it is a very Indian show.

What are your expectations from the show?
On personal front I'm not that ambitious but I surely hope the project to do well.

What would be your message to the fans.
Please do watch our new show Rakth Sambandh on Imagine TV and please to lend your support to the new couples and family.

Sriti Jha Reveals being extremely nervous to Resume Shoot; however her ...

disha_sen 10 years ago was missing her after she disappeared from jyoti. best of luck sriti

jnawaz 10 years ago this looks good..and i love sriti jha as sudha...gonna watch this one for sure =)

-Fivr- 10 years ago Thanks for sharing! I'm definitely watching out for this one.. =)

taanni 10 years ago i think this rakth sambandh plot is similar to an old malayalam serial SAMAYAM(time).
that serial too had 5 sisters & the youngest had loast eyesight, & they only had a father.

k_anjali12 10 years ago Seems like its some Telugu Serial ...

Pirated_Fun 10 years ago Please come back to Jyoti soon ..Best of luck for Rakht Sambandh , will sure watch it

jassie_17 11 years ago it definitely is a great family entertainer!!!

Kangana Shares Video of Anurag Confessing To Have 'Abused a ...
3 hours ago

Huma Qureshi Loses Cool; Says She has been 'Unnecessarily ...
5 hours ago

2020 is Turing Out to be a Fruitful Year for Prabhas!
5 hours ago

2 Weeks After Marriage, Poonam Pandey Gets Husband Arrested ...
6 hours ago

Kangana's Case Against BMC Gets Adjourned; Sanjay Raut's ...
7 hours ago

Saath Nibhana Saathiya 2 to go on air from THIS date?
8 hours ago
View More
TOP