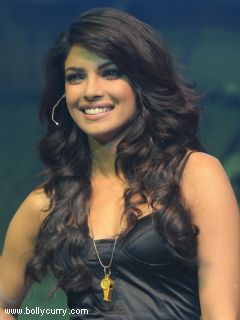 'I'm happy on the fact that 'Khatron Ke Khiladi' opened the way it has because this is the first time I'm doing television and secondly being a girl I'm doing a show like this, so it has been very encouraging for me,' Priyanka told reporters here.

Asked how is she planning to hold the high TRPs once other shows like 'Kaun Banega Crorepati' with Amitabh Bachchan and 'Bigg Boss' with Salman Khan hit the screens, she said: 'Khatron Ke Khiladi' is a four-week season, so by the time other shows will come on air, it will be over, so there is no stress.'

The 28-year-old actress was present at an event to launch radio station Oye 104.8 fm with actor Ranbir Kapoor, her co-star in upcoming film 'Anjaana Anjaani'.

Asked what would she like to give Ranbir if he enters 'Khatron Ke Khiladi' and wins it, Priyanka joked: 'There is no way that Ranbir will win the show unless I cheat for him.'

The show, that airs on Colors, is hosted by Priyanka and features male contestants performing daredevil stunts.