View Profile
The IIFA Awards brought the best and brightest of tinsel town to Toronto, Canada, this past weekend, for three days of star-studded ceremonies. If you missed even a moment of the three day extravaganza, fear not - Bollycurry comes to the rescue! Read on for the scorecard from the awards ceremony and see if it matches up with your predictions.

The mega-hit Dabangg, casting macho Salman Khan, swept the floor despite the evident absence of the Khan family at the event. 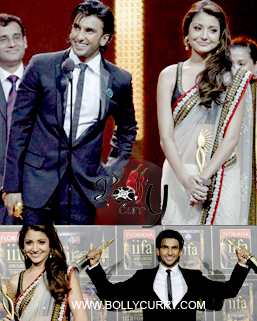 However, Sallu did not bag the Best Actor award, which instead went to 'Baadshah' Shah Rukh Khan! His hit film My Name is Khan also bagged its fair share of accolades.

And then, to the dismay of Katrina Kaif, Kareena Kapoor and all the other usual prospects, the Best Actress award was presented to the talented Anushka Sharma, for playing the bubbly Shruti Kakkar in end of year release, Band Baja Baaraat.

The film Robot managed to grab some awards too, although not enough to be declared acclaimed.

Moving on from Ekta to her protege, Prachi Desai after stealing hearts on small screen, has enamored one and all with her performance in Once Upon a Time in Mumbai.

Best Performance in a Supporting Role-Female [Once Upon a time in Mumbai]: Prachi Desai

Hrithik Roshan's Guzaarish did not go empty handed either.

And finally, Ritesh Deshmukh walked away with Best Actor in a Comic Role [Housefull].

Apart from those regular awards, here's a list of the specials.

Several stars also took the stage to give the audience powerful performances and make the night a memorable one. Kangana Ranaut donned her perky Tanu Weds Manu avatar for a dance; Sunny, Bobby and Dharemendra Deol shook a leg in honor of the senior star's Golden Jubilee Award; Bipasha set the stage ablaze with her take on the item songs of the year; Ranveer Singh and Sonakshi Sinha  participated in what was dubbed as the 'Debuts of the Year Dance Challenge'; Priyanka Chopra gave a fitting tribute to the living legend Asha Bhonsle by dancing to her hits from then and now; and Shah Rukh Khan - ever the fan favorite - took part in an interactive medley with the audience rather than dancing for them because of his fractured knee.

The promo of Love Break Ups Zindagi was showcased during the awards, and the weekend included several other international premieres.

Hope you enjoyed that quick trip through IIFA 2011 in Toronto - stay tuned as BollyCurry continues to keep you posted on all the headlines that emerged from the weekend's festivities!