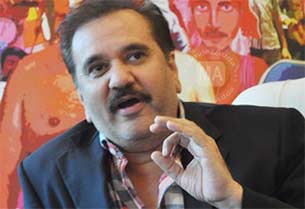 Theatre legend Feroz Abbas Khan's directorial venture "Dekh Tamasha Dekh" is a brutal chronicle of the communal divide between Hindus and Muslims that stares in our face. He says it was essential for him to express a concern for the times "we're living in".

Excerpts from the interview.

Q: "Dekh Tamasha Dekh" throws the simmering discontent between the two communities out in the open?

A: Yes, I think it makes the private the public. It started in our cinema with matters pertaining to sex and sexuality coming out in the open. But a confrontation of communalism in the public was so far hidden from cinematic view. The mindset of public communal violence begins in the privacy of homes. The tenor of discussion in these private discussions suggests that a genocide on a small scale is perfectly okay if it brings about any economic growth. Now that's kind of mindset where people sit in their drawingrooms and discuss violence. But they don't really go out and wash their hands in the bloodshed. They let other people do it for them. The minds behind those acts of violence stay out of sight.

The thinking class doesn't understand the long-term repercussions of their secretly sanctioned violence. To me (Bharatiya Janata Party's Prime Ministerial candidate Narendra Modi) Modi, non-Modi, VHP (Vishva Hindu Parishad) is not important. All these leaders are to me, manifestations of a dangerous mindset where the logic is, sacrificing 4,000-5,000 lives is ok, as it puts a community in its place and is also good for economic growth. Such rabid mindset doesn't realise what dangerous effects their action would have on society. It is this violent mindset generating out of the drawing rooms that troubles me.

A: Ha ha. You can say that. I can understand the minority communinity's feeling of persecution. But that doesn't make their vitriolic any less insane than the majority community's vitriolic. You can't say, 'My bakwas is better than your bakwas'. After watching my film, people are shocked by what they see.

Q: Was there no trepidation that this film would stir up a hornet's nest?

A: The responses in the most communally volatile places like Varanasi, Lucknow and Kanpur - hotbeds of communal tension - they all felt that the language of truth is undiluted. It comes across without prejudice and with no baggage.

I didn't make this film to generate melodrama by creating a filmy conflict between the protagonist and the antagonist. I made this film with no agenda except to tell the truth. It is neither for or against any community. I think I've been responsible in putting across the truth. Sure, the language that the two communities use to address one another is harsh. But nothing compared with the language our politicians use on television.

Q: Your film certainly doesn't flinch from confronting the demons of communalism?

A: For me, it was essential to go out there and express a concern for the times we're living in. The idea of communal identity being bigger than humanity is absurd and dangerous. Communalism is like a damaged ATM card from which something harmful will always come out. The next stage of the nation's development cannot happen without a character development. For the younger generation ever response is based on an instant emotional stimulus.

Q: So is the situation completely hopeless for the younger generations?

A: Young people in the smaller towns are connected with a sense of history. I've travelled to places like Patna and Kanpur with the film. The youth that I encounter in these towns is not the same people I meet where I stay in South Mumbai. In the larger cities, the youth is fed on alternate reality based on cricket and Bollywood. And that's a fine option to exercise. However to believe that alternate reality is the only reality worthy of inhabiting is a frightening thought. If you make diversion the focus of your life reality would one day be knocking on your door. Even the intelligentsia is shown to be quite helpless in my film. It's all very fine to be an intellectual. But what good is your ideology when you are beaten by a mob on the streets? Thinkers are becoming redundant. We're creating a sharply polarized society consisting of generations that are wither extraordinarily brilliant or a mass of morons.

Q: Your film comes during Lok Sabha elections. What do you have to say about the looming reality of a BJP government?

A: I've immense faith in the check, balances and sanity of the country. I think the people who will vote for Narendra Modi will actually be protesting against the complete failure of the Congress government. I am optimistic about the basic decency of the people of the country. However it is very important to be warned that this decency can easily be manipulated for small political gains. Political desperation leads to all kinds of bizarre alliances and compromises...like Mrs Sonia Gandhi meeting the Shahi Imam.

Q: How did you convince the censor board to let go the volatile content and the strong dialogues?

A: It was cleared nine months ago when Pankaja Thakur was still the CEO of the Censor Board Of Film Certification. She was very rational in her approach. The entire censor board loved the film. One lady actually felt children should be allowed to watch the film. But the film had go to the Revising Committee. After a very long discussion they decided I only had to cut 40 seconds of the Maulana's rabid speech.

Q: Would your future films continue to display the same level of social commitment?