Mumbai, Nov 9 (IANS) The inimitable poet-on-celluloid and well-known filmmaker Gulzar is gearing up to direct a film after a long hiatus and would like to team up with Rani Mukerji in his next project.

'I'd love to work with her in my next film. I know she won't say no to me,' said Gulzar who loved Rani's performance in 'Bunty Aur Babli'.

The details of Gulzar's directorial venture are yet to be worked out. He has two stories in mind and one of them will finally be his next feature film.

It's been a long wait. Gulzar hasn't directed a feature film in more than eight years.

'I know,' laughs the lyricist-filmmaker. 'Hu-Tu-Tu' came in 1999. That's quite a gap. I'm surprised people haven't forgotten me.'

In between, Gulzar put in an amazing amount of work for a TV serial based on the stories of Munshi Premchand for Doordarshan (DD). Not many people saw it.

'I knew the reach of national television was minimal. But what choice did I have if I wanted to do literature on television? The satellite channels are just not interested. Naturally, I took my stories to Doordarshan. I'm very proud of what my team achieved in the limited space,' said Gulzar who also directed 'Mirza Ghalib' for DD.

After this bitter-sweet tryst with TV, Gulzar is all set to work with his protege, composer-turned-filmmaker Vishal Bharadwaj, who will also produce the venture.

Bharadwaj was given his first big break as a music director by Gulzar in 'Maachis'. Since then they've remained personally and professionally close.

'I can't work with people I'm not comfortable with,' said the man who re-wrote the man-woman relationship in films ranging from 'Khushboo' to 'Namkeen'. 'Not at this age, not ever, in fact. For me a comfort level is of paramount importance.'

Though there were several offers to make films from big banners, Gulzar's heart was just not in it. 'So I kept myself employed writing lyrics.'

One of them, 'Kajra re' in 'Bunty Aur Babli', became a smash hit.

'I saw the film and liked its energy. But I thought it was a little too loud. If only the song had been filmed at an actual dhaba.... but I thought Aishwarya Rai captured the saucy coquettishness of her dancer's character superbly.'

'People call me up and ask, 'What's the line that comes after 'Aankhen kya kamaal karti hain?' I tell them that, 'Personal se sawaal karti hain.' They can't believe I could write such a lyric. But what's wrong with a fun lyric as long as it isn't suggestive or vulgar?

'I enjoyed working with Shaad Ali in 'Saathiya' and 'Bunty Aur Babli'. He's young, bright and full of ideas. I also worked with another young filmmaker Shirish Kunder in 'Jaan-e-Man'. Anu Malik asked me to write the title song. But the word jaan-e-man has been done to death. I'll have to give it a new twist.' 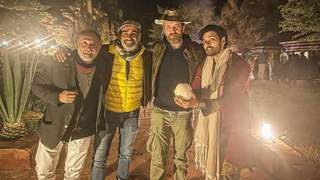