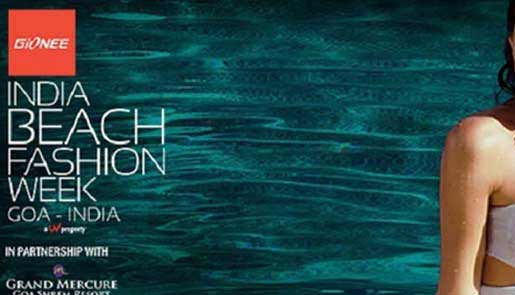 The inaugural edition of Gionee Smartphones India Beach Fashion Week (IBFW), held out something for everybody who plan to throw a destination wedding. From James Ferreira's range meant for sun-kissed beaches as well as Swiss Alps to Anjallee and Arjun Kapoor's "Persian Fantasy" collection for various wedding functions, there were a plethora of options for fashionistas.

With destination wedding as theme and Goa as venue, the event started with the presentation of Dayal's collection titled "Masti". Dedicating the show to adoption of the homeless dog movement of PETA, the designer unleashed a line-up of silhouettes that can be worn separate to bring out the diva in a woman.

Taking inspiration from Goan hues, there was joy on the runway when models in their cheerful mood showcased designs dominated by large flower prints that bloomed on the garments.

While Dayal impressed attendees with her fun and easy going collection, Barve brought designs inspired by the Kalahari and Namib deserts of Africa on sensuous silhouettes like safari shirts, bikinis, skirts and cholis.

Titled Kalahari, the designs played beautifully well with hot rustic palette of sand, sky and sun colours on fabrics such as tussar silk, tulle, kota, chiffon, silk, crepe georgette, organza, chanderi, raw silk, spun silk, and satin. There were varied options of silhouettes for all the "go-getter" ladies who love to experiment with their looks without fear of going over the top.

Beachwear is incomplete without Ferreira's creations.

The designer, known for his unique draping style, worked up his magic when he showcased a line that consisted of sharp tailoring teamed with bright prints and solid colours.

He experimented with construction techniques, introducing double layered saris and a combination of knit and jerseys on kurtas.

Destination wedding wear got a new high when Anjallee and Arjun Kapoor presented an assortment of looks with their "Persian Fantasy" collection for wedding ceremonies like sangeet, cocktail and reception.

On one hand, there were Persian architecture-inspired embroidery and jewellery motifs, and on the other there were corsets, body suits and corset belts teamed with saris to give a contemporary twist to the six-yard wonder.

Some of the outfits that grabbed eyeballs were fishtail gowns, and saris in black and red georgette in women's wear. For men's wear, it was an elegant combination of textures and fabrics with a collection of waistcoats, kurtas, pyjamas, sherwanis and Indo-western options.

Fashion and Bollywood go hand in hand. And it was again proved at the fashion week, which witnessed actors Amrita Arora and Ali Fazal adding a dash of Bollywood quotient to designer Dolly Sidhwani's range.

The show of Dolly Sidhwani was marked by a celebrity-studded front row too.

Apart from her husband Ritesh Sidhwani, who is a film producer, Sanjay and Maheep Kapoor, Chunky and Bhavana Pandey, Zoya Akhtar, Sarah Jane Dias and Adhuna Akhtar were seen lauding the designers' creative take on ensembles for men and women.

As far as business is concerned, domestic buyers like Aza, Fuel and Indiaqueen.com were seen keeping close watch on participating designers' creativity.