Sulagna Panigrahi shares her journey from her debut role in Amber Dhara to Do Saheliyaan and now her latest venture with Director's Kut and Star Plus serial Sapne Babul Ka Bidaai…. 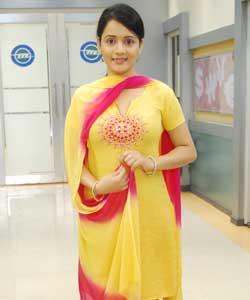 How did this role in Bidaai come your way?
I had met producer Rajan Shahi once casually after he saw my work in Amber Dhara and since then we have been planning to work together but couldn't be a part of his prior shows as I was in a contract with other channel. Then I had just lost hopes when I couldn't be a part of his recently launched show Chand Chupa Badal Mein. Finally he offered me a lead in Bidaai and there was seriously no reason for me to say no to it. And I always wanted to be a part of Star Plus family so it was like a cherry on top.

Could you elaborate on your character in the serial?
I play the role of an orphan who works in Mamaji's (Alok Nath) organization called Nari Niketan. My character name is Sakshi who strives for love. She is an ordinary girl who keeps migrating from one ashram to another.

And what kind of a look will you be carrying..
Sakshi is a very a simple and sober girl and I'll be seen wearing salwar kameez and will have straight hair with very less make up. They have kept it very natural. In short, it is a less time consuming look (smiles).

What's your entry sequence like?
My character would have a very heroic kind of an entry. It so happens that, Sakshi is passing from somewhere and Alekh is just about to cross a road. She sees that some vehicle is going to hit him, so she rushes towards him and then she pulls him back and saves him. Both of them fall and this is how they meet each other.

How has it been working with Angad Hasija (Alekh) and rest of the cast?
They welcomed me very warmly. I was a bit nervous on the first day but later they made me feel like home. Though as of now I have had maximum interaction with Angad only and he is a gentleman. Due to rain's our shoot spot was very muddy and I had to do many retakes but he did it without any complaints. He is humble and gives me lot of respect so now I don't feel awkward on the sets anymore. Also some crew members of my previous serial have also joined here so it is great.

So what kept you busy after Do Saheliyaan?
Actually I was waiting to go and meet my family, but I winded up with the shoot this month only so I barely got a break of 25 days. Then I was busy meeting other people for work and I had to wait for long for my contract to end. But this time I spent quality time with family as they came down here in town to be with me.

Now what are your expectations from the show?
It is a nice positive character; I haven't played such character in my career so far. I do not think much about future I believe in living in the present.I just want to give my best to this show rest depends on how people receive it. My character is very real and that is what tempted me the most. She is not an ideal bahu; she is a common girl and is vulnerable too.

Do you think Do Saheliyan deserved some more time to prove itself?
Definitely, in four months you cannot judge a show. It was a very short span of time. It would have surely picked up if it would have got some more time. The characters were presented and established quiet properly, though there was bit of goof up with the story. However later it was going very well. I don't regret about it.

So what are your future plans?
Playing a lead role in such an established and popular show is a big responsibility. I do not plan things; I like to live life as it comes. At this moment I am enjoying to be part of this show. Let's see what happens next.

barshan 10 years ago noo...we won't let Sulagna stays too long in alekh's life..we want only sara opposite alekh/angad..this sulagna can't act and never ever she can take sara's place...sara, plzz come back in bidaai..

tripple_em 10 years ago ii thnink this will work out ; i mean comon, sometimes we just need to give it a try . as much as we all want sara back , lets let her give a try :)
i know she'll rock this.

Shruti_sehgil 10 years ago We want sara back in bidaai..
we want to see only sara opposite angad..
sulagna is just disgusting..she never acts properly..she can't stand up to viewers expectation..

ab-cd_ef. 10 years ago there is nothing in bidaai to watch after sara and kinshuk.

sudi_karneet 10 years ago siggi u will rock in bidaii for sure....sabki bolti band kar dena.. :-)

sulagna ia a very talented actress...she will proove herself...so before commenting do gve her tym..she will win all of bidaii fans heart for sure..

mahajan_09 10 years ago @ yaami
Exactly! he is an oldie infront of ragini, i wonder how she is tolerating him,she was so lucky to have kinshuk earlier,but now she has got apurva uncle as husband lolzzz..
this girl is pretty and will suit alekh but ragini deserved better,poor girl ! feel bad for her,she looked best with Kinny