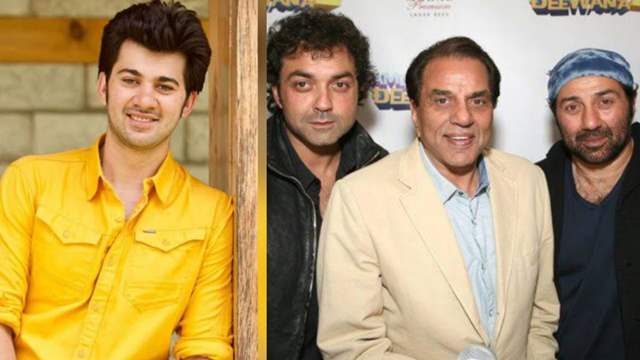 Karan Deol, grandson of veteran Bollywood actor Dharmendra shares how busy all the men in their family are. It is probably the busiest that all of them have been.

While Sunny Deol is busy prepping for Gadar 2 and Bobby Deol has been busy with a string of projects, including the next instalment of MX Player’s Ashram and the preparations for Animal, in which he will be seen sharing screen with Ranbir Kapoor and Parineeti Chopra.

Meanwhile Sunny’s sons are also focusing on their work projects.

His elder son, Karan, has been dubbing for Velley, younger son Rajveer is preparing for his debut venture as an actor.

Karan, who made his Bollywood debut with Pal Pal Dil Ke Paas, says,

“I hope that we can make time for a Diwali dinner together. We’ve all been caught up with work. We hope to have a quiet dinner, a game of cards, stay indoors on Diwali and celebrate the festival together at home in Mumbai. We want the celebration to be intimate and simple.”

Talking about the busy schedules of all the mens, Karan adds,

“I think it’s one of the busiest times we have all seen together. It’s a great atmosphere at home when discussions about all our work happen. It doesn’t always happen that all of us are busy at the same time, like we are right now. At the moment, my grandfather is super happy. He feels at home when he’s on a set. I have visited him and I have seen how infectious his energy is. His hunger to be an actor is undiminished. The passion for cinema that I have seen in him is so inspiring.”

“Papa is getting back to acting. He has many good projects coming up and I have missed seeing him on the big screen. Bobby chacha is creating a trajectory of his own, which is very inspiring. It feels good to see all of them working so hard and having so much fun. My brother and I are also busy with our projects, and there could not have been a better Diwali than this.

On workfront he will also be seen in the recently announced Apne 2, with his grandfather Dharmendra, uncle Bobby Deol and father Sunny Deol.