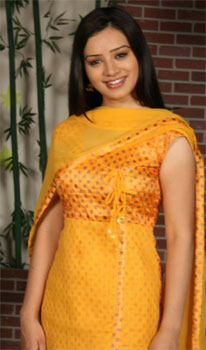 Daily Soap/Reality Show/Host/Epic: I would like to participate in a reality show.

The best thing you ever did for your mother: I am yet to do something for my mother. But I still remember that I had given her a gold bangle from my first salary.

You are Diplomatic/Frank: I speak my mind out and that's why I get into trouble.

Favorite Cartoon Character: Tweety, my little sister relates herself to this character, so I am very fond of Tweety.

Comic Personality on the set of DMG: Ayaaz is a full and full entertainer.

One Quality you would want in your partner: Loyalty

One attribute you like about Dr. Armaan: The extent to which he can go for the person he loves.

Your idea of a Perfect Weekend: It would be at Lakshmi Niwas palace in Bikaner. It was a palace which is now turned into a resort. It's a very beautiful place to spend your weekend.

One Bollywood Actor you would love to share screen space with: Paresh Rawal. He is a very good actor and can carry out any role.

USP of DMG, according to you: USP of the show is the entire team.

Favorite Memory: It has to be an incident that happened on 31st Dec 2007. I will not tell you what happened, but it was something special..

14 years ago Good luck for your exam Hansikaa...
All the best 4 the future...
hope u will succeed in watever u will do in the future.
And hope u will become a successful Actor one day..
And happy woman's day every1.

+ 2
13 years ago i dont like sukriti she doesn't act very well, she doesnot at all portray a sweet and innocent character, which shilpa used to portray, sukriti has changed the character of riddhima, riddhima now looks proudy, selfish, always ready to fight/argue etc., at first riddhima used to be so sweet, innocent and caring but sukriti has changed all that, she makes riddhima look miss attitude.

On another note..considering its not a dance show I would prefer Pappu who can't dance to Pappu who couldn't act anyday..:-p

14 years ago quite right! we know a very good female candidate for pappu who definitely cant dance. recently a friend of mine relegated her to the depths of hte earth, but she seems to have resurfaced to take revenge on hte earth by shaking it with all might.

+ 4
14 years ago @King
lolz..does pappu have 2 b a guy?..rofl
I can think of several nominees for dat title
n I haven't seen..Dr Shashikala dance..so have no idea
par he has returned 2 his Maine pyar kiya
Main tera dushman..dushman tuh mera days
So maybe its due to that..lmao

@Simplyvivacious
T'z Armaan..is Shah
He had problems logging in thats why
he used my ID..I didn't want 2 reply to that
but he insisted..btw u can call me Tara if u want

I had been trying to upload this meow-ratz avi for long but it kept deceiving me..thankfully its up..