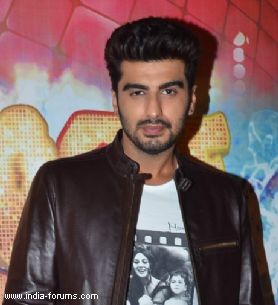 Actor Arjun Kapoor says he relates to the emotions that his character Krish goes through in "2 States".

"I relate a lot to the emotions of Krish and that is what mattered when I decided to do the film," he said.

"He is a very family-oriented, very righteous person by nature and he has taken his mother's side and tried to fill that void that is there because of certain conflicts between the father, son and the mother," the 28-year-old said here Monday at the launch of the new cover of the book "2 States."

"Every family has issues that subconsciously exist in our day-to-day lives. They come out only when something big like a marriage or taking up a job happens. The conflict arises at that moment. So '2 States' deals with that very interestingly," he added.

The film "2 States" is based on the popular novel by author Chetan Bhagat by the same name.

Arjun said that Ronit Roy and Amrita Singh, who play his parents in the film, made it very easy for him to pull off the kind of emotions the character required.

"Where Ronit and Amrita are concerned, they both are fantastic actors and they made it very easy for me to work with them and pull off a very difficult layer of the film," said Arjun.

"I know it appears as a broad family and romantic film but there is an emotional layer that comes in this journey of the boy when he is trying to convince everyone that two people who love each other deserve to be together," he added.

"2 States" also features Alia Bhatt, who will be seen romancing the actor in the film that hits theatres April 18.