A state level air rifle shooting champ, Priyanka Negi hails from Dehradun. Lady luck did not favor her in Indian Idol 3, but she came back with a bang this season, only to go home disappointed.  We talk to the talented girl about her dreams and career ahead. 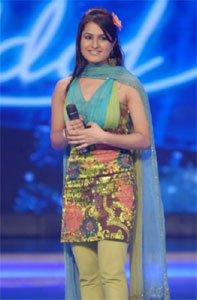 Featured Video
Priyanka was evicted last week from Indian Idol. “I really don’t know what went wrong. According to me, I fared well in all the rounds till now,” she says.

“I blanked out when my name for elimination was announced, as I never expected it. This was the first time I was in the bottom and did not even get a second chance to be in the race,” she adds further.

The judges as well as her co-contestants were shocked at her ouster. “The judges too did not expect this. I had a fear that we will lose out on another girl this week, but never did I think that it will be me”, states the girl.

Are you annoyed? “Actually I’m not, as it was really confusing for me and I’m still not able to come out of the shock and believe that I’m out,” quips the aspiring singer.

Whom are you going to miss from the show? “Everybody! The judges to my co-contestants and especially Anant Sir, who is our vocal trainer. I have learned many things from Indian Idol. This show has inspired me to sing better”, verbalizes Priyanka.

What is your next step after going back to your home town? “I will continue my studies as I concentrate on my normal shows. I have not thought anything more than this”, avers she.

You are a state level champ in rifle shooting. “I got inspired by my cousin Jaspal Rana. He taught me this art and today I feel proud about it,” she verbalizes.

Priyanka is compared to Katrina Kaif by her friends in Idol. “They keep telling me that I resemble Katrina, but I don’t think so. Though it feels great when people compliment me,” she concludes.

13 years ago priyanka definitelt did not deserve being eliminated... ananya,tulika & shini did not deserve it either.. doesn''t look like there is hope for female singers in indian singing competitions!!! so sad because they are all so talented. priyanka was performing very well and the judges were unnecesarily harsh on her. many of the boys don''t deserve to be there

13 years ago priyanka u were awesome! we''ll miss u in the show. all da best 4 your musical career!

13 years ago priyanaka is my favorite contectar ....i will miss her

13 years ago Hii Priyanka Negi..You Was my favorte contestar And i Really dont want you go voted Out..i Will Reallyy Miss youu!!!!!!

13 years ago this has been happening since indian idol 1 that it''s always a girl who gets eliminated first and the worst of singers become indian idol and the talented ones have to get out because of the public voting system.....im sure even this time it''s going to be a guy no matter how talented girls are but india won''t let girls take the lead

13 years ago sad to see another girl leave... all the best to her!

13 years ago Too bad she got eliminated. I really liked her....

+ 6
13 years ago Judges used to say always Vote 4girls but they need to say,vote 4gud singer weather its a girl or boy
Bad decision by janta that they throwing out gud singer & keeping in singer like Remo who even not coming in bottom..
All d best Priyanka.. may god bless u & u v a beautiful & succesful life ahed..