Sucheta Trivedi, better known for the simple and slow bahu, Meenakshi, of Baa Bahu Aur Baby talks to Telly Buzz about the change in her silly conservative character in the near future. 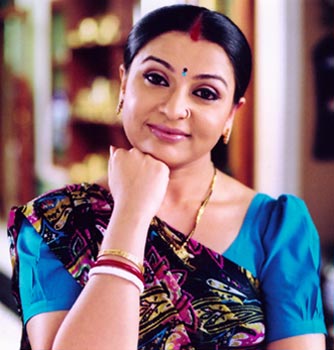 Featured Video
When asked about this latest turn of events, Sucheta replied, “I do not allow my husband to touch me which leads to complications.” Sucheta is happy working with the long time running show as she says, “I hope the show goes on for a very long time. Why mess with something that is making good money for the production house as well as the channel?” Apart from Baa Bahu Aur Baby, Sucheta is also seen in NDTV Imagine’s Ek Packet Umeed as Kanchan. The actress seems content working with Hats Off Production quipping, “Hats Off gives each character equal weight age unlike other shows where lead characters like Tulsi and Parvati reign supreme. I always want to be a part of the story and not the story itself.”

The actress, who has her own fashion boutique feels there is a huge family discrimination in Indian television when it comes to the attire of the characters. “The main protagonist is always shown adorning fancy clothes while the rest of the family members are clad in ordinary clothes. Why this family discrimination?”, she demands vehemently. Sucheta was earlier seen in Ekta Kapoor’s Kahaani Ghar Ghar Ki. So does the actress have any plans of returning to the Balaji camp? Replying to this, she says, “I have no problems working for Ekta Kapoor again. In fact, I would love to play the character of Draupadi in Kahaani Humaarey Mahabharat Ki.”

Voicing her opinion, the actress scorns the assault on Indian television spreading wrong values. Sucheta opines, “Television borrows ideas from society and not vice versa. For instance, see what is happening with the Arushi Talwar murder case. Social evils like adultery and dowry have been there since time immemorial. You’ll say we show people getting married 4 and 5 times, but do you think such people do not exist in our society?? They do, the only thing is that they are hidden. I give full credit to the industry for giving employment to a large number of people"

Talking about tying the knot herself, Sucheta quips, “I am receiving many proposals after Ek Packet Umeed. However, I am very happy being single. I have already been married to so many people on screen. Every day, I put on the mangal sutra to play a married woman, but then at night I am single again.”

londonlove99 13 years ago Sucheta is simple and straight forward...true to the word and world....she has always given her best and will always give her best...

+ 8
14 years ago i think she was brilliant as Shilpa and now doing a fabulous job as Meenakshi and Kanchan.

I love how she still fondly talks about Kahaani, I'm sure she misses it...also like her statement about the Arushi murder case and am totally with her for it being portrayed on KGGK.

+ 5
14 years ago she is awesome...that's all I have to say..a very brilliant actress

14 years ago shooooo shweeeet! and i agree... from Meenu of Ek Mahal... toh doing Chandan ka Palna... to Shilpa of Kahani to Meenakshi of BBB and now the kickass Kanchan of EPU... Suchita ma'am is an extremely versatile actor! Hats Off to Her!

+ 8
14 years ago Whether it's Meenalshi or Kanchan, Sucheta potrays each & every character she plays very well :)

14 years ago omg.. i thought this was someone else.. normally meenakshi looks diferent on the show.. wow!! or wait.. was there a change of actress that i dont know about? cuz i only watch bbb once in a while

+ 2
14 years ago what a versatile actress! love her and every member of the BBB unit!
but i do disagree with the 4 to 5 times shaadi thing, you will see 3 times shaadi kabhi kabhi but 5 times..cmon thats jus crazy! look at how many times prerna madam has been divorce or married or single, ive lost count! lol
I despise ekta shows and maybe its showing the 0.00000001% of india, I dunno! cos people dont just come alive after plastic surgery done 3 times after 20 years. very unrealistic for me, im sorry!

14 years ago She is a fab actress, loved her as the headstrong Meenu in Ek Mahal Ho Sapna Ka, this role is miles apart, just goes to show how versatile she is :) Tfs.