Anas Rashid, currently playing the character of Prithviraj in Star Plus’ Dharti Ka Veer Yodha Prithviraj Chauhan shares his views with Telly Buzz's Binita.R, about his stint as the warrior Prithviraj, his experience so far, and above all the stunts used in the recent Ashutosh Gowarikar film, Jodhaa Akbar.. 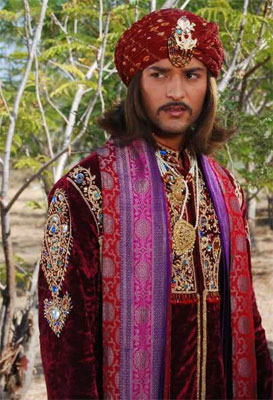 Featured Video
How did you get the offer for Prithviraj Chauhan?
I got a break in television through Balaji two and half years back in Kahin Toh Hoga as Karthik Ahluwalia for a year. The role was very popular at that time. Later I was looking out for a good role and was at home for months and months. I personally feel that it was very difficult to defeat the image of Karthik Ahluwalia. My friends informed me that there were auditions happening for Prithviraj Chauhan show and I went ahead. Before I got this much coveted role, I never used to watch Prithviraj Chauhan as I was always out of home on weekends partying. Later I came to know that the show is doing well and the TRP’s are good, and I was interested to play this character.

How far have you read on the life and history of Prithviraj Chauhan?
Ya, I knew he was a warrior but what I studied in my school days was the kind of person and a warrior he was and that too only around 1- 2 pages. I actually went to internet and saw who was Prithviraj and Ghori and this was interesting for me. I was later asked to come to Baroda for the shoot and there I got my formal training in horse riding, sword fighting etc. Now, I feel I am the real history for children and the fact that kids are not restricted to the pages of the history book now, makes me feel happy.

What attracted you to take up this role?
First thing was he was a warrior and second thing that provoked me was the love story between Prithviraj and Sanyogita. It is a very sacred relationship that they share. When my writer explained the nuances of the love story, I was touched as it was not like the other usual where they say you have taken my kids or my wife. I got attached towards this story a lot after reading just the script.

How has the experience been on the sets so far?
It’s been very tough. I never see myself as an artist, but I see myself as Prithviraj Chauhan when I am sitting alone and to myself. Shooting in the dense forests, the fierce battleground scenes are very tough and stressful. But I just love to be in my character all the time, and just do not bother about hunger or thirst. For me, work always gets high priority.

Have you received a lot of offers after you took on the role of Prithvi? How has the recognition been like?
Ya, a lot of production houses are eager to take me, but then they know that I am currently working on Prithviraj Chauhan. After doing so much I felt that it’s been a great experience and I have got many compliments, especially from the youth like they feel that I have actually done a good job getting into the skin of the character. This role demands heroism and I guess I am doing my job well. It’s a complete package with action and romance. No other serial can defeat it as in other serials, we hardly see action sequences, but this serial has everything. After doing this role, when I see the action scenes in Jodhaa Akbar, where the protagonist is shown moving the sword, fighting with elephants, I really do not feel anything great about the stunts shown there.

Have you been inspired by Jodhaa Akbar?
Well, to tell you the fact, nothing really inspired me from Jodhaa Akbar. I have seen much better epical movies than that before. The critic said that it’s a mixture of Sagar Arts and Ekta Kapoor. Frankly speaking, I did not feel that I learnt anything .I can say that the direction was of superb quality, wherein Hritihk is shown moving his sword at a brisk pace. Even I have enacted such a scene. There is one scene where Aishwarya Rai is admiring Hrithik’s man power as he handles the sword. Let me tell you, I have done almost 10 similar scenes where Sanyojita stealthily watches me.

Are you planning to take up any other project now?
No, I am fully into playing Prithvi, so I cannot even consider about anything else now.

10 years ago Anas, you were just too good as elder Prithviraj Chauhan, it was and will always be one the best show. Whether it is the young or the grown up Prithvi, both Anas and Rajat were fantastic.

rishabh sharma 13 years ago he has perfectly replaced rajat no doubt and has a bright future......he has given a real picture of yuva prithviraj chauhan...

14 years ago Well after Rajat is gone, Ana has been a good acter in the charecter op prithviraj chauhan... but yeah Rajat is the best!

Ana you are right about the movie Jodha akbar.. but don't be so mean....
Dont compare yourself with Rhithik...
every one is good in diffrent things.... so if you can swing your sword better than him.... then he can do other things that are better than yours...

+ 3
14 years ago Anas is doing a good job in prc!Atleast...that z wat i feel....but ANAS comparing himself 2 HRITHIK....not rly satisfying!He cant be compared 2 RT but then anas is anas...rajat is rajat...

14 years ago lolz is he outta his mind comparing himelf wid Hrithik. In PRC he always hv the same clueless expressions on his face as if wat m i doing here. Sumbody plz tell him he can never replace the impression Rajat left in our minds and heart as PRC. N Rajat will always be the PRC for us

+ 3
14 years ago please dont compare yourself with a STAR!