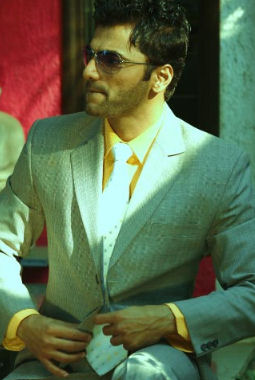 The chocolate boy of the television industry, Anand Suryavanshi, turns hot and spunky. The actor has taken ample advantage of the strike to concentrate on his workouts and has managed to get the to-die-for six pack abs that any youngster would want. And it was not a job done overnight.

In an exclusive interview, he shares with the readers the rigorous routine he went through to attain the perfect body.

What prompted you to go for such a body?
Honestly speaking, I was always into body building and aimed to be fit and fine. Even when I was a kid, my father, being a sports person, used to push me into doing namaskars, sit-ups, and this got me hooked on to working out. But due to the hectic shooting schedule, I could not continue my gym activity. But now, I decided to go all out to get a great body, as I knew I had the potential. It was a blessing in disguise that I got ample time to work out owing to the strike, and I made the most of it.

Any particular reason for this make-over?
I wanted to shed off my goody-boy image and be known as the 'Hot' man of the industry. People who know me off screen have always told me that I should push for it and do something different on screen. Above all, there is such a good feeling of well-being within me now. Having said this, TV is very clich in characterization, but I would want to play a sexy guy or a cool dude.

Now that you have achieved what you wanted, what kind of roles are you looking for?
Anything that I have not done so far!! I will never go near the good son, good husband kind of roles as I have portrayed them to death. 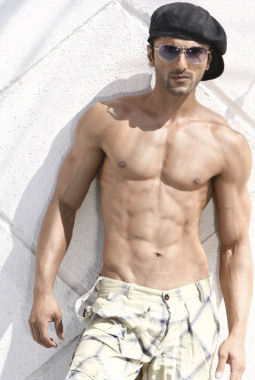 So are you eyeing at Bollywood too?
Of course! If things materialize, I might be doing a very good role in few months' time. Let's see.

Do you think it's a need in the industry to sport six pack abs?
Lot of actors have now turned to fitness as I believe, it enhances your other qualities and adds to your persona. Six packs do not harm you in any way; it just changes your lifestyle. There is no necessity that you sport such a body, but being an actor it is necessary that we look fitter and younger.

So have you succeeded in getting a six pack ab?
Yes, I have six packs and much more (laughs). I can easily claim that I have the best body in the industry now!!

Explain to us the laborious schedule that went in to achieve this body makeover?
I have been training for nearly 3 months now. When I began, I was working out with Prashant, but later got trained under the guidance of Viraj Sarwalkar, who is Mr. Mumbai, Mr. Maharashtra when it comes to fitness. He has been my trainer cum dietician. Working out has been fun for me. The pain I endured during the rigorous work-outs was enjoyable, as I had a goal in mind. Self motivation was the key here, and I used to push myself to work harder. Even if I slept at 2 in the night, I used to be up at 6 to hit the gym.

So does it mean that you followed a particular diet plan too?
Yes, my diet chart was planned by Viraj. I have nearly 6-7 small meals in a day, and surprisingly, I eat everything. I used to have veggies, curds, rotis, almonds, walnuts, chicken, protein shakes, salads etc. The only thing I did not touch is rice. I used to have food in a calculative manner, and I used to write down my diet chart in a book as soon as I had food. The best thing about Viraj is that he would give me the yummiest protein shake after my work out. It used to taste so nice; I have never had such a yummy drink in my life.

What does that protein shake contain?
Well, the ingredients of the drink have been Viraj's closely guarded secret. He has not even told me about it. 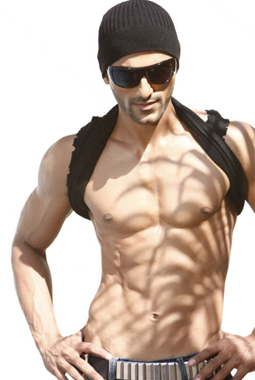 Can you give our readers some Do's and Don'ts when it comes to working on your body?
We need to devote time to working out daily, as we do not give our body the much needed physical activity when doing our daily chores. We should never overeat, as it gets stored in the body as fat. Don't starve yourself to look trim, as you will be screwing your body and metabolism. Eat to your own capacity so that you shed weight and remain fit for a longer time. Above all, remember that abs are not made in the gym, they are built in the kitchen.

It is heard that many take to steroids to gain body?
See, few use steroid injections on the body to look huge. Genetically speaking, we do not have it in us to grow huge; so people like athletes and body builders add something that is not natural to gain body. But for actors like us, we aim to get a decent muscular structure and a well defined body. So I don't think we need to use steroids.

How have your family and friends reacted to this change in you?
I have got some fantastic reviews from friends, and they feel I am looking very lean and fit. But my parents do not find it so appealing (laughs). They are shocked in a negative way, and my mom feels I have literally stopped eating and am starving myself. But the fact is that I have transformed myself into a non-food person to a man with good eating habits. Many of my co-stars are also behind me, and want to know what I did to get such a body.

Do you consider yourself as John or a SRK of tellydom?
Well, I feel I have the hottest body in Tellywood. No offence as I know that I am the best. I now hope to get a chance to remove my shirt on screen (grins).

So what will your dream role be now?
A Dostana 2 sounds good. I just hope Karan Johar is listening (smiles). On TV, I would like to do something on the lines of Gladiator.

Lastly, what about the female fan following that will increase now?
Well, I can just say, more the fans, the more I feel cooler!!(smiles)

+ 5
13 years ago he says he THINKS that he has the hottest body in the town !! What is wrong with this sentence everyone has right to put across his/her thoughts without DEMEANING or being PERSONAL towards anyone !..Please dont be overly harsh ..mean..rude! It can hurt his fans..nd honestly its hurting!

psst... can you get the ingredients for the protien milk shake from you trainer?

abhi4life 13 years ago What a big time loser...he should take a good look in the mirror before making such comments abt himself...He may have abs but he has an inflated ego that should be put in its place....And I think he''s not at all good looking or even that good an actor, so just having a good body won''t do much

+ 2
13 years ago Haiiiiii re....Rishi Sir revealed!!! ;-) Great interview guys and even greater pics!!WOWWW!!! I must say Hussain and Anand have really worked on their bods, good for them...staying fit will keep them healthy and if they''re healthy, we''re fit!!! :D

but honestly, i think hussains the best =) all the way <3...i love my sumit

13 years ago Without a doubt, the best body in Tellywood belongs to... Mr Ram Kapoor of Kasamh Se :-|