After a successful stint as a judge in Star Plus' Chote Ustaad, Pritam Chakraborty will now be donning a new robe – The role of a Guru in Zee's Sa Re Ga Ma Pa Challenge '09... He will be the man in charge of his Gharana 'Dhoom'.

Here’s the man himself telling about what is expected from a judge and also the contestants in a reality show. 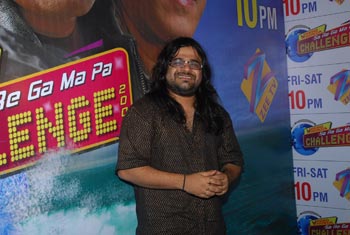 Featured Video
What do you have to say about being the judge in Sa Re Ga Ma Pa?
Through Sa Re Ga Ma Pa people will get to hear nice songs from some really talented contestants. They will get to see new talent. Who wins is secondary for me. I told all the contestants that wining and losing is not important. A win doesn’t make one a playback singer instantly and a loss doesn't mean that his career is over. It’s just a confidence building platform. Winning here should not be the ultimate motto. The contestant should have the attitude that I should give my best in every performance and after that it is up to God and what he decides is what is destiny!!

Due to elimination and harsh comments by the judges in reality shows, children go thro' a lot of mental stress. What do you want to say on this?
From the time of being a judge on Chote Ustaad, I am of the view that elimination system should be removed in these shows. Elimination creates a psychological impact especially on kids. I think instead of elimination, ranking would be the best option. And about the harsh comments, in Chote Ustaad we all made sure to spend some time with that kid after the shoot whenever we passed any harsh comment on any of the contestant to make sure that they remain motivated.

+ 2
14 years ago Remove Public SMS voting. Elimination is part of contest or else how do u find the champ-winner.

The reason rude-harsh comments are passed on is to increase TRP. Inturn voting franzy. SO remove SMS voting problem solved.

pritam was such a good judge in chhote ustaad

+ 2
14 years ago Uhhh whats the point of seeing someone win then huhhhhh??? If they dun get eliminate should thney start copying songs and start singing like uuuu

14 years ago If there is no elimination, how will the channels make money???????
guss pretam forgot that part!!!!