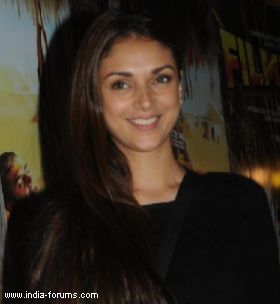 Aditi Rao Hydari says when she stepped into the Hindi film industry, she was clueless about playing the "game", but she's now glad to have found her niche in tinsel town. Her aim here onwards is to become an "irreplaceable" actress.

"It's all falling in place. I am happy that I have own place now. I want to be known as an actress who is irreplaceable. What is mine must only be mine," said Aditi, who will be seen in distinctive roles in "Guddu Rangeela" and "The Legend Of Michael Mishra".

It has taken Aditi a while to find her bearings in the film industry ever since she came here in 2006. She has been finalised opposite Farhan Akhtar in Bejoy Nambiar's yet untitled film. That's the leap in her career Aditi was waiting for patiently.

Aditi, who starred in "Yeh Saali Zindagi" and "Delhi-6", feels it's a disadvantage to be an outsider in Bollywood.

"Not that anyone takes advantage of you. I firmly believe the way one is treated depends on one's conduct and intentions. Of course, men will look at you in a certain way if you are single and attractive. I believe most men behave strangely with women when their wives and girlfriends are not watching," she added.

Luckily, she hasn't met the wolves of Bollywood.

"So far I've had no bad experiences. But yes, it hasn't been an easy journey for me. I didn't know how to play the game. I wish I had people to tell me what to do, how to look for the right roles. In the absence of a support system I just did whatever I thought right.

"I don't regret any of my career decisions. Nor do I feel victimized or mistreated. But I do feel there are two distinct types of career opportunities in our industry. One for girls from film families and another for girls who come to the industry with no connections."

"I am not saying, 'Don't favour actors and actresses from within the industry'. Why not? Lineage advantage is a given rule in every sector. Children of potters and entrepreneurs go into the family profession. Likewise, star kids. But at the same time, I think non-industry strugglers also deserve a chance. So there should be equal opportunities."

"Let us outsiders prove ourselves. For that, we need the roles."

The actress, who was also seen in "Rockstar" and "London Paris New York", always felt over-qualified during her period of struggle.

"I don't know what it was about me. I was told it was a problem of slotting me. 'You are a complete package. I don't know how to use you in my film.' I'd hear this many times. It took a long time to find out they meant - I'm good looking and talented and I could sing and dance. So they didn't know which of my skills to use."

"Bollywood expects actresses to dumb themselves down. That's the way the men like it. I say, stop just talking about new talent. Have the courage to give breaks to actors who are not established or connected to film families."

Not that Aditi has any reason to feel sorry for herself.

"I've been lucky. My struggle was neither long nor painful nor humiliating. I've heard so many chilling stories of what non-filmy newcomers have to go through. I just wish I had better guidance when I came here."

Aditi says she lacked experience, the required lineage and the diplomatic skills to make her way through the film industry.

"I may come from a very distinguished background. But that meant zilch to my career in Mumbai. No producer would give me a role just because my great grand-uncle was the governor of Assam or or my great grandfather was royalty. I mean, who the hell cares where I came from?"

"I was a raw newcomer with no one to tell me what to do. On top of that, I had no connections within the film industry. Nor could a hold a drink in my hand and mouth pleasantries at parties."