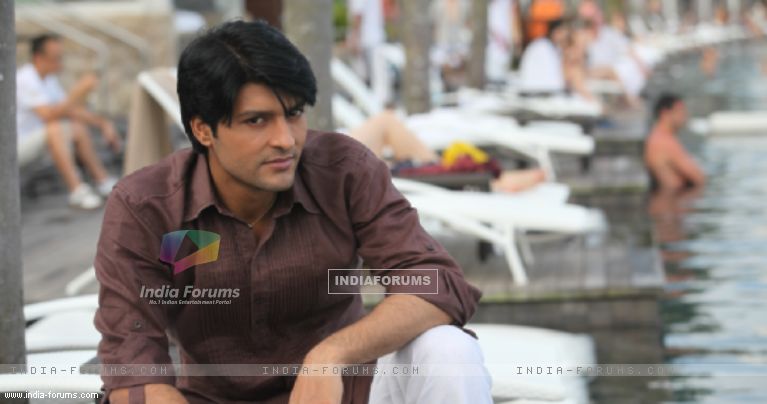 He is winning audiences' heart by essaying the role of Suraj on Star Plus' much loved show Diya Aur Baati Hum. Yes, we are talking about the good looking and popular actor Anas Rashid, who is also known for his on-screen characters like Kartik Ahluwalia, Prithvi Raj Chauhan, Yashwardhan and many more.

Anas has gained much experience when it comes to acting or giving auditions but do you know how difficult for Anas was to crack his first audition? Going down the memory lane, Anas shares more about his first audition in this conversation with TellyBuzz...

Talking about his first audition, Anas shares, "My first audition was for Rajshree Production's show Pyar Ke Do Naam - Ek Radha Ek Shyam. Getting a call for an audition was a big thing for me then and its impact was so much on me as if I got work. It was a joyful moment for me and I called my Ammi and told her that I have got a call for an audition. I went for the audition and I got my lines. They told me that if I can't do it right now then prepare it well and come next day. So, I spent one day in preparing my lines. Next day I went for the audition well prepared but then I forgot my lines in front of the camera. Kavita (Kavita Barjatya) Mam wanted me for the role and she was trying to convince me to go ahead with my lines anyhow but I was not able to speak those 5-6 lines. I had accent problem and I used to face problems in speaking Hindi then. I too wanted to go ahead with my lines well but it was a helpless moment for me. There came a point when I stopped preparing myself for the audition and I started to prepare myself for fulfilling Kavita Mam's wish as she wanted me for the role and I wanted to live up to her expectations. I could not crack that audition because of my accent problem."

"Star One channel was launching then and I was called by Ekta (Ekta Kapoor) Mam for her upcoming show Kya Hoga Nimmo Ka. During my first audition, I had practiced so many times that here my audition was a success and I signed the show. Slowly Slowly I improved my accent," adds Anas.

When we asked Anas about his feeling when he first entered the audition room, he told us, "Somewhere I had the idea about the ambiance of an audition room. I was little bit aware of everything because I had done few music videos in Punjab. I was not conscious with camera but I didn't know how to execute things when I was told to enact like any other actor. That situation was bit scary for me and I was being given so many breaks so that I can make myself comfortable."

Looking back to those days, Anas feels proud today to have crossed all those hurdles. He says, "I feel so proud today because I could see the journey of an actor. Those were the days when I didn't know how to speak and I wanted to work. There is big difference in today and those days. Today, if I think of moving ahead in life and achieve something bigger, then those days make me feel that everything is possible but you have to be on your toes and you have to behave like a stranger to everything that keeps coming your way. The moment you say that you have learned everything, it becomes your stoppage point. My journey reminds me that nothing is impossible. Its inspiring!"

5 years ago Nice interview by Anas He is very talented

5 years ago Anas Rashid, Sooraj is doing well, just hope that his Sandhya comes back to him and he gets well soon and follow his dream :)

5 years ago I love the last para... its damn inspiring..

5 years ago I like this article about how Anas tried to improve himself. Thank you, Anwesha!

5 years ago Our hero we all proud of you.. Allah bless you..

+ 2
5 years ago Thank you Anwesha for the Int and very inspiring one for the youngsters who wants to try in this field All the best Anas We want you to reach the heights of success and be as you are always Love you !!!

5 years ago wow anas..u'r such a gem of a person yaar..love u more now aftr ths intervw! god bless..

5 years ago Anas you're a great hard worker..down to earth person..proud to be your fan..all the best..stay with god murugan blessings :)

5 years ago Anas Rashid, WOW, you are the best one, your words and down to earth statement is FANTASTIC, there is a lot of good things on your way Anas as your fans are with you, also an award is not just holding a trophy in hand, the place that you have in loads of fans around the world is a big award, glad to be one of your fan, also your great bonding with all your colleagues is wonderful, great bonding and positive vibes do create miracles and you did, have and hoping that you will always be like you are. All the best to you, keep moving and thumps up for you :)