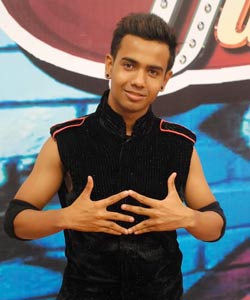 After excelling in every performance and putting in all the efforts, Shyam Yadav has successfully made his way into top 4. He has been consistent in his performance and has always impressed the judges as well as the audience with his mind blowing dancing skills. Shyam idolizes Mudassar Khan who is one the judge on the show as his dance guru.

Shyam has come a long way in this show. Mudassar has been Shyam's guru since he began his dancing journey. Being a part of Mudassar's Fire Academy of Dance, Shyam and Mudassar have known each other for years.

TellyBuzz got in touch with Shyam Yadav to know more about his experience throughout the show, his association with Mudassar Khan's dance academy, his favorite contestant and much more...

How has been your journey in DID Season 4 so far?

It's a great experience. It feels great that I have been appreciated by the judges and grand master Mithun Chakraborty on this platform. In fact I was selected 5 times as the best dancer of the week. I have got a unique name as crazy legs by my co contestants because they believe that my foot movements seem to be crazy. I was dancing under Mudassar Sir's team named as 'Mudassar Ki Mandli' and I am the only contestant from his team who is the finals but I have spent the best time with my team mate especially with Swarali Karulkar and Dhiraj Bakshi.


What do you find best about this season of DID?

How is your equation with Mudassar Khan?

Mudassar Sir and I know each other since many years. I was a student in his Fire Dance Academy from past seven years. The day I have joined his Academy and till today, I have learnt a lot from Mudassar Sir. He knows everything about me. He knows me and understands me more than my Mom. Though we knew each other from long back, but he has always treated me as other contestant without being biased. He did not disclose our relation because it might have created the thought that he is being partial. But later when he disclosed our relation to everybody, everyone was very happy to know about our relation. He also showed everyone a slide show of our old pictures and Mudassar Sir hugged me on the stage with affection. This was the best moment of my life.

Which is the one quality of Mudassar Khan you want to inculcate in you?

Mudassar Sir is so down to earth. He is not double faced person and is very genuine with a clean heart. His simplicity is the best quality which I want to inculcate in me.

Tell us something about your association with Mudassar Khan's fire dance academy?

When I was a kid I used to participate in School's annual day functions and other small functions. So my parents thought of putting me in good dance academy. My tuition teacher told us about Fire Dance Academy as her daughter was already learning dance from there. And I learned dance there from the Five Dance Academy for 7 years.

Who is your favorite contestant?

Who is the toughest competitor?

I am very much confident because I challenge myself every week to give better performance than the previous. So I am the toughest competitor for myself. But other than me, Vicky Das from 'Firoz Ki Fauj' is a tough competitor for me.

TellyBuzz wishes Shyam all the best for his remaining performances in the show Dance India Dance season 4!

+ 2
7 years ago Congrates shyaam love ya
So happy for you.
You and mudassar were the only reason I was watching did 4 and used to skip everything else
I so wanted you to win
Good luck for your future

7 years ago Love biki das and U.. Hope one of you become d winner of did4

7 years ago I think the author of this article should read their work at least once before posting it. I highly doubt Mudassar Sir's dance academy's name is "Tire Dance Academy" and I might be wrong but I think it is Biki Das and not Vicky Das

7 years ago Love you Shyam..
You are a superb dancer..

+ 2
10 years ago Now it makes sense why Deepika wanted to see Katrina's passport! The whole controversy on Koffee with Karan!! LMAO!! I'm guessing Deepika was trying to point on the fact that Katrina's fake?! LOL! This is truly unbelievable!