Sajid Khan famous for his funny one-liners will now grills actors in his first Chat show on television, Sajid's Superstars on COLORS.

But before that, let's see how he ducks our questions... 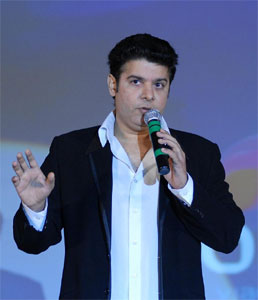 Featured Video
We've heard your talk show is very bold, so are you ready for our BOLD questions?
So you are going to ask me bold questions?? Ok go ahead…

Which one is your favorite talk show or which show inspired this talk show of yours?
(After thinking a lot) Jeery's Spriner, I would say is my favorite. But this show of mine is more or less my brainchild..

Since you have been in the industry for long and established yourself, does that make it easy getting the stars?
Yes it is, we are like friends and I feel in a chat show one can invite only friends and not someone whom you are meeting and seeing for the first time personally. It is very essential to have a good relationship with your guest to make the chat show interesting.

Which actor you regret inviting in your talk show?
No one!! Everyone is a superstar.

What's your definition of a Superstar?
Superstar is any one who is shooting round the clock and who is mobbed by the crowd every time he walks in public. That is my definition of Superstar.

Are your questions planned?
Well they are not planned, they are actually in my head and it pops out at the right time!!

There are many places where the stars ask the production house to cut certain quotes but you flashed what Ritesh asked you to cut in your first episode?
Yaa I have and I feel that you have to watch the episode to know more…..

What's the worst part of a television talk show?
Sometimes it gets boring, so I will make an attempt that Sajid’s Superstars never gets boring!!

Who are the best people to hang out with--actors, writers, producers, or directors?
All of them!! (laughs)

Which was the last film you saw in the theater? Except yours!
Dark Night and Batman, I saw it almost five times.

Do you think all the top stars or actors would have come to your talk show if you'd not been the brother of Farah Khan?
I don't think Farah being my sister has anything to do with my career. In fact she hasn't helped me even one percent, so I don't know where this comes from!!

People say your movie Hey Baby was a Hollywood rip-off. Your comments!!
What could I say if people want to say that? If people haven't seen, why do they make such accusations? Let them see and they will know it is not!!!

How many series do you think you could run of your talk show at a go without exploding?
How many series with out exploding!!! I think I can easily pull up with 10 seasons. This is just the first season and there are only Bollywood actors now. In season two there will be mixture, the cricketers, fashion designers, actors everything.

14 years ago Sajid Khan, no doubt is a brilliant director, anchor, etc etc.

But he exaggerates alot. ALOT.

Goodluck with the show.