View Profile
Young and handsome singer Najam Sheraz who is a happening musician from Pakistan is now in Mumbai to release his first official album Najam which is being marketed under the label of Frankfin. Najam tells Jyothi Venkatesh in a guftagu that he felt bad that he was not given his due credit when Mahesh Bhatt copied his number Menu Tere Naal and passed it off as Bheege Hoth Tere in Murder

You came to Mumbai first in 1999 to release your first album Pal Do Pal Ki Chahat. What went wrong?
It is true that Pal Do Pal Ki Chahat under the label of BMG Crescendo was my first release in India. However, the timing of the release of the album was wrong. It was released when the Kargil war between India and Pakistan was on and I suffered because my album obviously collapsed.

Tell us about your first official album Najam.
Yes. You can call Najam my first official release. Since the release of my first album, I have been in touch with Kanwal Kohli of Frankfin, who has been constantly urging me for the last four years to come up with my next album in India.

What is the USP of Najam? 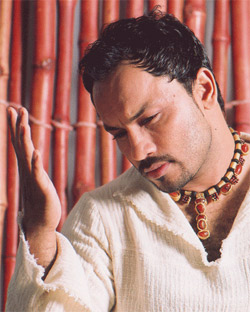 The compositions in Najam depict amalgamation of different genres of music, be it eastern classical or folk, rock or funk and even blues. My aim as a musician is to spread peace and harmony through my music. I am of the opinion that it is only the conflict of interests that exists between Indian and Pakistan, not enmity.

Is it a cake walk to come up with a music album in India?
On the contrary I would say that you have to think ten times before you come up with an album in India, especially if you are from Pakistan because there is a huge population in India which listens to film music for 24 hours, unlike in Pakistan where only Punjabi film music is heard.

Can you elaborate?
Right from the times of K. L. Saigal, Indian film music has been popular the world over, whereas the Pakistan film music industry has developed only in the last twenty years and is quite different from Indian film music. It is sad that both Indian and Pakistan lose out because of music piracy.

Is it true that you turned down Mahesh Bhatt's offer to compensate you for having plagiarized your hit number Menu Tere Naal?
Yes. When the promos of the film Murder started appearing in all the channels, I rang up Mahesh and introduced myself as the composer of Menu Tere Naal. He apologized to me that he could not locate me before asking my permission to record the number Bheege Hoth Tere with Kunal Ganjawala for murder and asked me point blank whether I wanted money from him. I told him that I felt bad that I was not given my due credit for the number and asked him for recognition, not money.

Were you happy withy the way Kunal had sung Bheege Hoth Tere?
I am human. Since it was my own creation, obviously I was not at all happy with the way Kunal had sung the number which I had composed and sung. In particular I was unhappy wityh the vulgar lyrics in it like Phir Subah Tak Main Tujhe Pyaar Karoon, which was not there in the original number Menu Tere Naal.

You were slated to sing Tu Hi Meri Shab Hai for Gangster. What went wrong?
Yes. Though Mahesh told me that he would record a song with me, it did not happen, because he said Indian film companies do not com e up with the music of the films, but the music companies which dictated the terms and conditions to the producers and hence he was helpless.

Why didn't you ask Mahesh to let you compose for a film of his?
I did ask him but Mahesh told me that Indian film industry does not recognize the Pakistani composers. I told Mahesh koyi qurbani deeta hain, koyi credit leta hain.

Who have inspired you to take to singing?
My range as a singe45r was such that I could carry high energy songs when I started singing. Rock stars of the 80's like like Bryan Adams, Banjo Vie have inspired me a lot as far as my singing is concerned.

Is it true that besides music, you also play professional cricket?
Yes. It is true that I used to play professional cricket with Imzimam way back when I was just 19. In fact Imzi was my room mate. I left cricket when I could not bat in the 1989 match when Sachin Tendulkar was the captain of the Indian team and I was in the Pak team when Mushtaq Ahmed was the captain.