The handsome Karan Grover of Saarthi fame is back to television with Sahara One’s Woh Rehne Wali Mehlon Ki!! 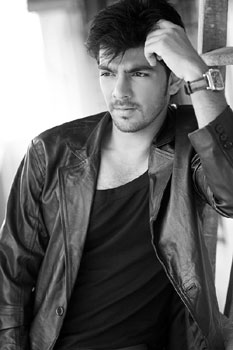 Featured Video
“This break really did wonders for me”, exclaims the actor. “I had really gone out of shape last year, but then got working on my fitness; even traveled quite a lot”, says Karan. The actor will play the main lead opposite Neha Janpandit aka Rani in the serial that has taken a generation leap just last week! Karan is very happy to have got into Rajshri Productions, “They are so organized and disciplined. I really love the peaceful working environment there”.

Ask him about his successful record of sharing an exemplary on screen chemistry with newcomers, the actor laughs and quips, “I am set to make a record here, just wait!! When I did Saarthi, both Neha Devi Singh and Zalak Thakkar were new to the industry, and so was Adita Wahi. Ashima Ballal was also a fresh face when I worked with her in Meri Awaaz Ko Mil Gayi Roshni. The same trend continues as I am cast opposite a new girl Neha here”. With a grin on his face, he adds on, “But I give all credit to the women for the amazing on-screen chemistry we have had”.

Talking about his character in Woh Rehne Wali, Karan says, “I play the quiet and reserved Rishabh who has an arranged marriage with Rani, i.e. Neha Janpandit. This guy has a very rugged look and is quite mysterious in nature owing to a bad past, yet is a positive character for sure! After marriage, Rani helps him to come out of his problems and this is when the love story between Rishabh-Rani will start”.

Ask him whether he aims to get back to reality shows, the actor who is quite adventurous in real life is quick to say, “I would love to host, but not participate in the singing/dancing shows. Rather, I would want to try my luck in shows like Fear Factor”.

His comeback into television would surely make his fans really happy!!

10 years ago I love ur all characters. U r rock star.

+ 3
14 years ago His name is Karan Grover? Wow theres gonna be alot of confusion for me now. .lol...

14 years ago thanks... will definitely try to watch him back in action!!!