View Profile
Rohit Roy tells Jyothi Venkatesh that he does not have even one serial in hand ever since he turned an anchor-producer with Inside Bollywood.

You do not seem to have even one serial in your kitty as an actor. Why?
It is true that I do not have even a single TV serial in my hand as an actor. I have called it quits as far as acting in serials is concerned, because I have set my eyes on reviving my career as an actor in films. Besides acting in films, I also want to devote quality time to my new show Inside Bollywood, as 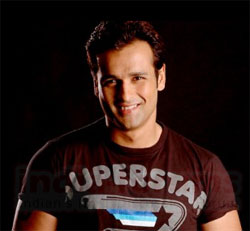 Featured Video
the producer-anchor of the same.

What exactly is your show Inside Bollywood all about?
Inside Bollywood is basically a show which deals with issues which affect Bollywood. It is a show where people like Mahesh Bhatt would set out to articulate at length about the pros and cons of the various problems which affect the functioning of the film industry at large.

How many Bollywood celebrities have you interviewed till date for the show?
I have interviewed directors like Madhur Bhandarkar, Sanjay Gupta and Nagesh Kukunoor, actors like Sanjay Dutt, Dino Morea, Naseeruddin Shah and Sunil Shetty etc. besides actresses like Pooja Bhatt, Koena Mitra, Tanushree, Tabu, Sharmila Tagore and Neha Dhupia.

You have the reputation of being very choosy as an actor. Why?
Though I was indeed very choosy about the projects that I set out to sign, at the same time, I should also admit that basically I was quite a laid back actor. I never believed in going in for the kill like some of my colleagues in television who ate more than what they could possibly chew.

Does it mean you are no longer a laid-back actor?
Yes. You can say that. The entire scenario underwent a very radical change in outlook with Manish Goswami's TV serial Sarkar which was on air on Zee TV. You can say that the whole game on TV changed with the arrival of Sarkar, which set the benchmark for serials. I'd also go to the extent of stating that Sarkar was the revival of Rohit Roy. Before Sarkar, I confess I had done a lot of crappy serials.

Which according to you is your best serial as an actor?
To tell you the truth, though I have quite a few well known serials to my credit, I have never really liked myself as an actor in any serial other than Sarkar till today. I think I did in Sarkar, what I did in Swabhimaan which actually marked my debut on television, years back when actors had this condescending attitude towards television.

How would you rate your elder brother Ronit Roy as an actor?
Ronitbhaiya is a very talented actor who has got his due very late on television though he should have been inundated with the best of roles as far as films are concerned, because he knows his craft pretty well.

Do you plan to cast Ronit Roy in your next film as a director?
Yes. Though Ronitbhaiya is quite busy with his commitment to TV, I have asked him to spar dates for me because I want to cast him in a stellar role in my next directorial venture, the details of which I just cannot divulge at this point of time.

Tell us about your role in Don Muthuswami?
It was a pleasure working with a gem fo a person like Mithunda in Don Muthuswami. I play a smart ass accountant who is not only a smooth operator but also a white collared criminal who cheats the Don of his money. It is a comedy film but I was sure when I heard the script that I'd portray my role as a role without making it a caricature. To put it a nutshell, Don Muthuswami is nothing but a cat and mouse game with Mithun Chakraborty and me.

Which are your other films as of now?
I am quite excited about Mittal V/s Mittal directed by Karan Razdan. It is a role which is dynamically different from the one I had essayed in Shoot Out At Lokhandwala. My vulnerability was liked in Shoot Out At Lokhandwala. I play the role of a marital abuser in Mittal V/s Mittal. What I like about the film is that it neither preachy nor judgmental. 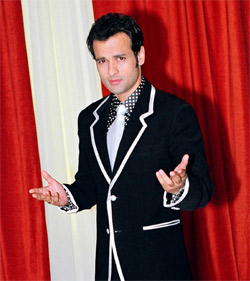 Can you elaborate?
What I mean to say is that Mittal V/s Mittal sets out to show both the sides of a coin in the right perspective. The film sets out to state that though a man could be passionate about his wife, if she is a cold woman, she could presume it to be an act of abuse. I think it is perhaps for the first time that someone is making an attempt to make a Hindi film on a burning contemporary issue like this in our country.

How good are you at tackling comedy roles?
I am doing Tanvir Khan's next untitled film which will be an out and out comedy with Celina Jaitley as my leading lady. I am also doing Kalpana Lajmi's next film Love Mein Koyi Rules Nahin, which will be a multi layered film.

Tell me something about your next film Alibaug, as an actor!
I am acting with my talented wife Manasi for the first time in my career in Sanjay Gupta's Alibaug which will also present me in an entirely different avtar as an actor. I essay the role of a doctor in Alibaug, which will be a slice of life film. My role in Alibaug is an extension of my personality in real life. I hope that people will set out to appreciate my versatility.

How do you manage to act, direct and produce, besides being a doting husband and a fond father?
I do only whatever I enjoy doing. I never plan. I take up only one assignment at a time. You can say I am good at multi tasking as a person.

Are you producing any other serial besides Inside Bollywood?
I will be producing the serial Rang, The Color of Love for Zee. It will star Ketaki Dave, Rasik Dave, Sejal, Muni Jha and introduce a new girl called Manasvi.

Tell us about you next directorial venture!
I will direct a huge action film with big stars for Sanjay Gupta for his banner White Feather. -Jyothi Venkatesh