View Profile
Sophie Choudhury, once VJ and acclaimed singer, has even proved her mettle in acting with a juicy role in Pyar Ke Side Effects. After all, it’s not possible to forget the impact of ‘coffee treat’ episode in that feel-fresh film. The talented damsel is back, again, with a haplessly hyped movie Alibuag. Here is an insight and much more from the actress herself…

Q. You are in Sanjay Gupta’s Alibaug. How was it working with Sanjay?
A. I know Sanjay Gupta for long. He always used to ask me about what kind of film to cast me in. One day he called me to his office and surprised me offering the character of Nisha in his upcoming film Alibaug. The story, he described me, was astounding and I couldn’t help accepting it. For three hours we had a group narration with other actors. It was wonderful and Alibaug has been the most wonderful experience of my life. It’s a beautiful script and the actors I am working with in this film are fantastic. I always wanted to work with Sanjay Suri. I think he is a brilliant actor. Again, there are Parveen Dabbas and Diya. It is really a well assembled cast for the film. 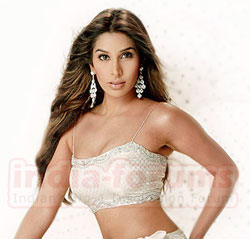 Q. Please tell us about your character in the film.
A. I am playing physiologist who is experiencing blues of her failed marriage. This character is completely different from all I have played before. People have always watched me in glamorous roles. But Nisha, my character in this film, is little bubbly, little emotional, little serious, grounded and in a nutshell it’s a solid role in my career. It is a real life character observed and experienced by Sanjay Gupta himself. Alibaug is really Sanjay Gupta’s life and all the characters in it represent someone in his life only.

Q. How close is the character to your heart?
A. It is very close, because it is that side of Sophie which people have never witnessed. Everybody knows that Sopie is someone who is always bubbly and very jovial but I have emotional and quite a sensitive part in my nature which, this character, reveals very well.

Q. Please tell us about the film.
A. At this stage of the film, I can tell you only that the film depicts life of a bunch of college friends. It deals with their college days showing their friendship and how close they are to one of their professors. After that they depart and get together after ten years with different problems like failed relationships and various other problems in their lives. Keeping all aside, they start living their life together like the way they used to during their college life. But the seriousness looms around and the story scrolls down showing how they solve their problems one after the other.

Q. Any interesting incident which you can recall that happened on the sets of Alibaug?
A. The most exciting part of the film was that we felt like a family where we never bothered about our personal characters but about the film only. And everybody used to get involved and give feedbacks on each others’ works in a way to help each other. Another amicable aspect on the set was that all the other girls would have come in rescue of other girl facing problems regarding her outfit and all. We had a long schedule in Goa and that was really a big bonding experience for all of us. I really loved working on Alibaug. Only few weeks are left in its shoot and the film is tentatively getting released by July or August. I just can’t wait for it.

Q. Your character in Shaadi No.1 and Pyaar Ke Side Effects were more or less similar. What would you like to say about that?
A. The character of Dimple in Shaadi No.1 was not of an intelligent girl but Tanya, I played in Pyaar Ke Side, was an intelligent one whose goal in life was very clear to her. It was her positive approach towards life that I liked very much about her. Nisha in Alibaug is different from these two characters. She is very strong, bitter and a bit angry, too. This is a kind of character which women will really appreciate.

Q. What other projects you are working in?
A. I am doing my first item number and that’s even with Sanjay Dutt in Sanjay Gadvi’s Kidnapped. I have always been putting down all proposals of item numbers before but I couldn’t say no to Sanjay Gadhvi. Besides, Sanjay Dutt is also the big thing. So, how can one say no to it! Any girl saying no to this song will appear foolish. Sunidhi has sang the song very well and to be in a musical number for Sanjay Gadhvi, you know, will really be fantastic. Apart from that I have a comedy film for a big banner which I won’t name right now, Money Hai toh Honey Hai with Govinda and a Boby Bedi film with Rishiji sharing screen space with me.