Hussein Kuwajerwala and his better-half, Tina celebrate their 3rd wedding anniversary on December 21st. And on this occasion, we spoke to Tina to know what she has planned for the D-day. 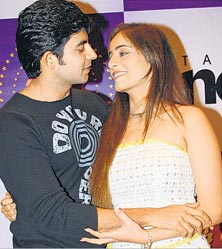 Featured Video
“We are in no mood to celebrate our anniversary this year. Mumbai has just gotten up after the terror attacks, but the tragic incident is still in our minds. So we decided that we will not plan anything extravagant this year. In any case, Hussein will be shooting on the day”, quips Tina.

“We might have a quiet dinner at night after he gets home. We also have a show in Bangalore the next day, so have to be on the move on 22nd”, adds she.

When asked about the gift that Tina has planned for her beloved, she says, “It’s a big surprise for him. I have bought a DVD player and that will get fixed in his car today morning. He loves to listen to music when he is out driving, so this will really make him happy”, avers the loving wife.

So what does she expect from hubby on their D-day? “Well, I don’t want anything from him. But the fact is that we have been spending much of our time together for the past few days, and he has not got the time to arrange something without my knowledge. So I don’t think he will surprise me today”, says Tina.

Hussein has been missing from Kumkum for quite some time now, and his fans are eager to see him back in the show. “Yes, he has been busy with Idol and has been working on his film too. But he will be back soon in Kumkum, so keep watching”, verbalizes the fashion designer.

On Hussein’s big break into films, she states, “I am very happy for him, as the dream which he has been carrying for so many years is coming true. I hope things fall in place and his fans love him on the big screen too”.

As we wish the lovely couple a happy wedding anniversary, we wish Hussein all the luck for the big leap too!! 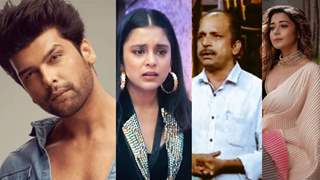 13 years ago Happy Wedding Aniversary to huti and all the best to hussain for his upcoming movie .

Happy belated marriage anniversery HuTi..love u both..
Hussain will surely rock in bigscreen!!!

Congrats Hu for his movie start definitely he do big

+ 2
13 years ago Happy anniversary Tina and Hussain! :-) May you both have many many many more to come! :D Count your blessings and be grateful that you both were lucky enough to find someone sooo perfect for you! :-)

+ 2
13 years ago Happy Anniversary Hussain and Tina...May you both have a marvelous day today..

omg and thanks to Tina for lettin us know that Hussain will be back soon in Kumkum...
misssingggg him soooooooooooo much in Kumkum...too much...waitin for u hussain in Kumkum..love u both....

13 years ago such a cute article!!....i wish a very happy marriage anniversary to hu-ti...wow!!!hussain has already started shooting 4 his film....bt missing him toooo much in kumkum.

13 years ago Happy Anniversary Husein-Tina!! All the very best to both of u...Keep rocking,smiling n spreading love n only love as u guys always do!!!