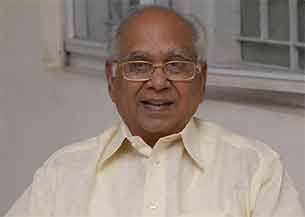 Mourners queued up at the office of Telugu Film Chamber, where his body was kept Wednesday afternoon for the people to pay their last respects.

Police and volunteers had a tough time in controlling the surging crowds. Men and women stood in long queue to have a last glimpse of the thespian who died Wednesday at the age of 89, plunging the Telugu film industry into gloom.

Earlier, similar scenes were witnessed at Annapurna Studios, where the body was kept since Wednesday morning. The body in a flower-bedecked vehicle was later taken from the studio to the office of the film chamber.

The funeral procession, which started from the Film Chamber around 1 p.m. Thursday, will pass through Jubliee Hills and return to Annapurna Studios, where the last rites would be performed in the evening.

Rao's actor son Nagarjuna and other family members were accompanying the coffin on the open-top vehicle.

Earlier, film personalities, politicians and eminent citizens from various walks of life paid their last respects to ANR, as the actor was popularly known.

On a call given by MAA, the Telugu film industry remained shut Thursday as a mark of respect to the legendary actor.

Kinshuk Vaidya opens up on pay cuts during the lockdown!