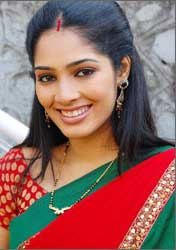 Sahara One and Contiloe have finally got the new face to play the lead character of Bitto. As we know, Anjum Farooki of Aap Ki Antara fame was earlier finalized for the role, but she had opted out later owing to date problem. The latest is that Hritu Dhudani who essayed the role of Birwa in Imagine's Bandini has now bagged the role of Bitto.

Our Source says, "Hritu  has completed all formalities and will be starting shoot in a day or two". When contacted Hritu confirmed the news to Tellybuzz, "Yes, I am playing Bitto now".

As reported earlier, Vineett Kumar of Bebo fame will play the male lead from now. Meanwhile, Pallavi Gupta the original Bitto had her last working day with the unit yesterday

Let's hope that the revamp will bring in the much needed numbers!

+ 2
10 years ago Good luck to Hritu and all her future plans.

12 years ago but yeah kaise mujhe tum mil gayyi shud be there...

12 years ago i like
haule haule
marjaani
guzarish
mahi
and
desi girl...

raags 12 years ago This seems to be a good complilaion.

12 years ago Marjani rocks too.

anyways i loved the tracks