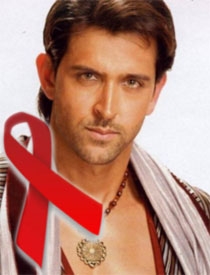 Hrithik Roshan was promoting his latest film Kites with co-star Barbara Mori at the Cannes film festival. However, the superstar flew down to Mumbai to attend the International AIDS candlelight memorial at Shivaji Park, Mumbai. His wife, Suzzane Roshan also accompanied him.  The function in commemoration of those who lost their lives to Aids.


Also present was director turned actor and singer Farhan Akthar. Despite busy schedules, he made himself available for the event. Parmeshwar Godrej also graced the gala. Afterall, it was her along with Richard Gere, who had launched the Heroes Project in 2004 to fight AIDS.


Among others choreographer Sandeep Soparkar performed with his model girlfriend Jesse Randhawa at the event. Actress turned successful director and humanitarian Nandita Das shared the stage with children who were suffering from Aids. Shobha De also lit a candle at the memorial.


We certainly hope celebrities do not stop at just attending events and lighting candles but actually do more to help victims of this disease.
Featured Video