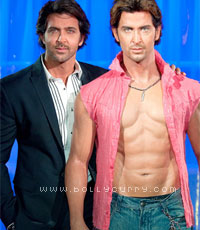 Abhishek Bachchan, have met their match in another suave stud who has recently been tagged as B-town's new "gay icon". The honor was bestowed upon none other than handsome hunk, Hrithik Roshan!

Just a few days back, it was announced that he was amongst the top 10 most kissed celebrities at Madame Tussauds, though his statue was only unveiled this past January. Not only does his wax likeness attract the attention of fawning fangirls of all ages, but also of many men who admire his fit physique and irresistible charm.
Given this amusing tidbit, should KJo amend Dostana 2 to accommodate Hrithik and turn the cast into a terrific trio? We, for sure, would not object, and we doubt many of the fairer sex would miss the chance to see all of their favorites together on the silver screen!