Mumbai, Jan 11 (IANS) The music of Ashutosh Gowariker's historical love story was released by an erstwhile royal who is a direct descendent of queen Jodhabai, and the director says people have liked the modern adaptation of 16th century sounds.

'The response to the first two songs has been surprisingly positive. People were expecting archaic songs, but they liked the modern adaptation of 16th century sounds,' Gowariker told IANS in 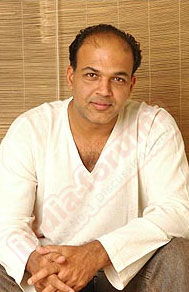 Troubled and tired of all the controversies surrounding the leading actors, Gowariker says: 'Aishwarya (Rai) and Hrithik (Roshan) get along really well. Even at the wrap up party they were fine with each other. I just want to say both Hrithik and Aishwarya were extremely dedicated, professional and sensible.'

The leading lady's husband Abhishek Bachchan never interrupted the shooting, says Gowariker who is recovering from a back problem.

'Abhishek came only when he was shooting in Karjat next door for that song in Ram Gopal Varma's 'Aag'. Even then he'd drop in before the shooting started, have tea and leave.'

Q: Is it true that a company dumped the music of 'Jodhaa-Akbar'?
A: It's true that we were looking at an association with Big Music. But we didn't agree on certain rights issues for the music, so we parted. UTV Music, a label that Ronnie Screwvala wanted to start later during the year, was launched in a hurry to release the 'Jodhaa-Akbar' music. We had the music release function Jan 9. The (erstwhile) Maharani of Jaipur, Rani Padmini, who's a direct descendent of Jodhabai, and her husband flew down to release the music.

Q: Is it true you're cutting two of the songs?
A: No. There're only five songs recorded for 'Jodhaa-Akbar'. And we've retained all of them. I treasure every song that I record and wouldn't dream of cutting them for length. Even if we had nine songs, only two would wind their way into the charts. Though we've five songs, I've worked on making each hummable.

Q: How do you think the younger generation would react to the music?
A: The response to the first two songs has been surprisingly positive. People were expecting archaic songs, but they liked the modern adaptation of 16th century sounds.

Q: The songs were never made to blare at pubs. Never targeted at the youngsters?
A: Why do you say that? When 'Pyar kiya to darna kya' was created, it was youngsters who were throwing coins on the screen. When Dev Saab (Dev Anand) sang 'Khoya khoya chand', it was the young who swooned. And when Shammi Kapoor said 'Yahoo', it was the young who responded. I'd say the film comes first. Whatever emerges from it should be suitably marketed. The music of 'Jodhaa-Akbar' can't be bhangra and hip-hop. Just because the film has Aishwarya, please don't expect an introductory song and dance. It's not a star vehicle. It's about the characters. I'm showcasing Jodha and Akbar.

Q: Have you injured yourself?
A: No, I strained my back while lifting a heavy bag.

Q: Did the bag contain Hrithik?
A: (Laughed) Well Hrithik, Aishwarya and I have certainly been carrying an awesome burden on our shoulders. I'd like to compare my struggle to release 'Jodhaa-Akbar' to a videogame where you play the first level very easily. As you go to other levels the game gets complicated.

Q: What's the truth about Hrithik and Aishwarya not doing the publicity for the film?
A: Not true at all. We now have a publicity plan for them. It had to be aligned to the music and film release.

Q: And what about these stories of how the two couldn't get along?
A: Absolutely untrue! I don't know how and why this is being said. Aishwarya and Hrithik get along really well. Even at the wrap-up party they were fine with each other. There was no rivalry between them. Aishwarya is the most professional actress I've worked with. She never brought any guests on sets, or her cellphone for that matter. There were stories about how she was asking a spot boy for tea while Hrithik was rehearsing.

Q: Did Abhishek ever drop in?
A: Only when he was shooting in Karjat next door for that song in Ram Gopal Varma's 'Aag'. Even then he'd drop in before the shooting started, have tea and leave. I just want to say both Hrithik and Aishwarya were extremely dedicated, professional and sensible. They knew exactly what they had to do. It wasn't as if they were shocked by getting into a period piece.

Q: Especially after 'Dhoom 2', it must have been tough for them to get into the Mughal era.
A: Yes, but even for 'Dhoom 2' they had to assume an alien body language and personality. In 'Jodhaa-Akbar' too they've worked to create a new persona. That couldn't have happened if they weren't focused.

Q: When is the film releasing?
A: We were very keen on Jan 25, but because of my back problem I was told to be in bed for 21 days. Now we're coming on Feb 15. At the moment that's the date.

Q: Valentine's week for co-stars who aren't the least attached to one another?
A: (Laughed) That sounds like a good idea for an intensely romantic film. So far we've been looking at festival weeks to release 'Jodhaa-Akbar' - Eid, then Independence Day and now any Friday when 'Jodhaa-Akbar' releases is celebration week.

Q: It's been a tough film for you.
A: I wouldn't say so. The process of filming 'Jodhaa-Akbar' has been really enjoyable. I've no issues except the back problem. 'It's not going to be postponed any more.' That's my Hanuman Chalisa these days.