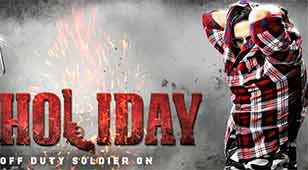 "Holiday - A Soldier Is Never Off Duty" is in its second week and has managed to earn almost Rs.80 crore. A trade expert says it's inching closer to Rs.100-crore mark at the box office.

The Akshay Kumar and Sonakshi Sinha-starrer hit the screens June 6 and has made good earnings so far.

The A.R. Murugadoss directorial that boasts real stunts and real locations has been presented by Reliance Entertainment and produced by Vipul Shah.

If Akshay is seen doing action sequences like he has never done before, Sonakshi also got a chance to throw a punch or two and fulfil her desire to braid her hair in a sporty way instead of letting her hair loose, which she generally does for most of her films.