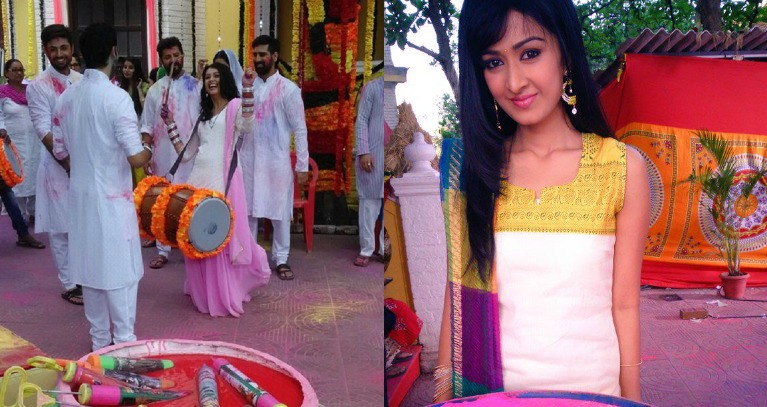 Beyond Dreams Production's popular show Veera on Star Plus has kept its audience glued by bringing new the twists and turns in the show.

As per the current track, thing are getting back to normal between Veera (Digangana Suryavanshi) and Baldev (Vishal Vashishtha) but Bansuri along with Manjeet (Usha Bachani) is trying hard to separate them by playing awful tricks. On the other hand Gunjan (Farnaz Shetty) is pregnant but doesn't want to become a mother and so she has not told about her pregnancy to Ranvi (Shivin Narang).

Let's see what will happen next.

As per sources, "There will be a holi celebration at Baldev's house. Ranvi will not be able to be a part of the celebration as he has to go out of station to perform. Only Gunjan will come to celebrate Holi in her maternal house. Manjeet will play her dirty game and will give bhaang mised thandai to Veera. Manjeet wanted to spoil Veera's image as she will do weird thing after drinking Bhang. But instead people especially baldev find those weird behaviors cute as she will play the dhol and dance like a kid. He will take Veera inside the house and both will have some romantic moments."

Later there will be sequence where Gunjan will meet with an accident and will have a miscarriage. She will be happy as she wanted to abort the baby."

What will be Ranvi's reaction after he gets to know about Gunjan's miscarriage news together? Will this holi bloom love between Veera and Baldev?

...SBS... 6 years ago Vishal Vashishtha and Digangana Suryavanshi u both rock!!

6 years ago Love you both Vishal Vashishtha and Digangana Suryavanshi

+ 3
6 years ago Vishal Vashishtha and Digangana Suryavanshi you guys have a natural chemistry! Love you

6 years ago Love u lots Farnaz Shetty but I don't like the way the makers are ruining Gunjan's character.
Want a happy track for RanJan

6 years ago Love Vishal Vashishtha
Rock on my darling...you are simply awesome :) Can't wait to see you on my screen every day

6 years ago I love Vishal Vashishtha! His chemistry with Digangana Suryavanshi is the best! Can't wait to watch VeeBa romance!