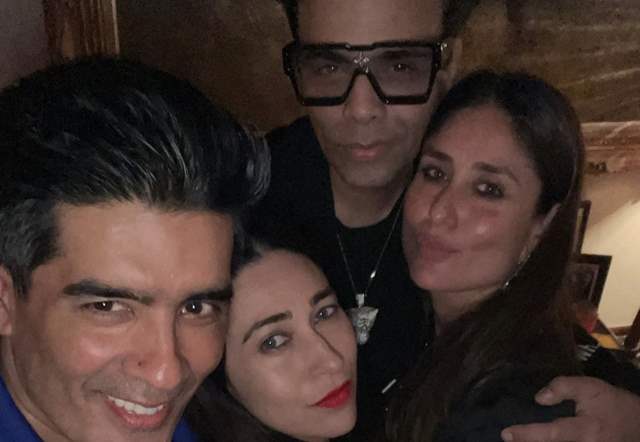 Kareena Kapoor Khan have been in the spotlight since yesterday as the diva marked her birthday. Wishes had been pouring in for the actress from every nook and corner of the world and that’s not even surprising knowing the fandom Bebo enjoys.

Yesterday afternoon the actress was spotted heading to Randhir’s house along with Saif and was joined by her family members as they gathered for her birthday lunch.

But later in the evening Bebo hosted a stunning party for her family members and fraternity friends and it appeared to be a blingy and starry night.

Karan Johar, Manish Malhotra, Malaika Arora, Amrita, Kunal Kemmu, Soha, Alia, Ranbir and many others graced the occasion and put their best fashion foot forward as they arrived in style.

Now Manish Malhotra has taken to his social media handle and shared a bunch of inside pics from bebo’s birthday bash which are just unmissable.

In the selfies we can see ace designer Manish Malhotra posing with the beauties Kareena and Karisma. Karan Johar and Maheep Kapoor could be seen in yet another picture. In one of the pics Malhotra can be seen striking a pose with  Malaika Arora.

Bebo was dressed in a black outfit, while Karisma added a pop of colour with her red dress. Malaika looked stunning in her black body-con dress.

Well how can a Bollywood party having Bebo not be so blingy and classy, and hers definitely seemed to be

Talking about her professional life, after being a part of Laal Singh Chaddha with Aamir Khan, she will be seen making her OTT debut with Sujoy Ghosh. The film will also star Jaideep Ahalwat and Vijay Verma in pivotal roles.