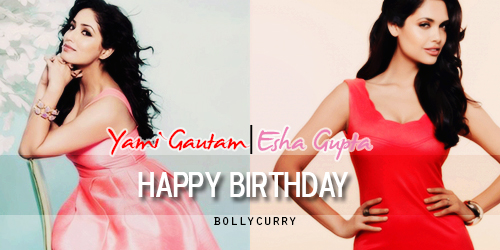 BollyCurry gathers with its fans today to celebrate the birthday of two gorgeous leading ladies of Bollywood. Yes, we are referring to Yami Gautam and Esha Gupta!

Gautam was born on 28th November 1988 to Mukesh Gautam and Anjali Gautam. Her father was a vice president in PTC Network, a Punjabi Channel. She has a sister Surilie Gautam who is also an actress. The gorgeous star initially aspired to become an IAS officer and pursued her education in Law. However at the tender age of 20, she began to pursue her acting career.

Gautam began her journey with the TV show "Chand Ke Paar Chalo" followed by "Raajkumar Aaryyan". She became a household name with the show "Yeh Pyar Na Hoga Kam" opposite Gaurav Khanna. Gautam then debuted in films with a Kannada movie Ullasa Utsaha (2010) and subsequently did Telugu and Malayalam films. Her debut in Bollywood happened with Shoojit Sircar's romantic comedy Vicky Donor (2012) alongside Ayushmann Khurrana. Besides this movie turning out to be a commercial and critical success, her role earned her positive reviews along with multiple awards. She is currently working on three big budget films including Action Jackson (2014), Badlapur (2015) and Hamara Bajaj (2015).

On her birthday here is a glimpse of some of her popular songs:
On the other side we have the elegant Esha Gupta, celebrating her 29th birthday. Gupta was born on 28th November 1985 in Delhi. Her father is a retired Airforce officer while her mother is a homemaker. She has a sister named Neha Gupta. Gupta completed her graduation in Mass Communication from Manipal University, Karnataka. Even though she received a scholarship for higher education, she decided to pursue an acting career.

Gupta participated in the Femina Miss India contest and has won 3rd place in Miss India International and also won Miss Photogenic. Gupta made her Bollywood debut with Mahesh Bhatt's Jannat 2 (2012). The movie turned out to be a super hit and her subsequent release Razz 3D (2012) was also received well by the audience. Other movies she has stared are Prakash Jha's Chakravyuh (2012) and Humshakals (2014). Gupta made a special appearance in a party song, "Dhat Teri Ki" from the movie Gori Tere Pyaar Mein (2013). She has also hosted a programme for the National Geographic channel.

On her birthday here is a playlist of some of her popular songs:
Do you think you know these two beauties in and out? Take the quiz below to find out!

Trivia Quiz
Writer: Vaishnavi V.
Editors: Nisha M. and Sonia R.
Graphics: Virina R.
Do you have a suggestion or comment for BollyCurry? Drop us a PM at BC_Dropbox today!