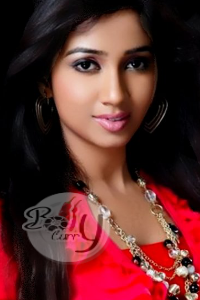 
Her journey as a professional singer kicked off on the stage of Zee TV's reality show Sa Re Ga Ma Pa, where her talent was first showcased. The breakthrough in Bollywood came in due time, with Sanjay Leela Bhansali's grandiose project Devdas which all other debates aside could boast of some brilliant chartbusters. Still two years to touch the formidable 30, Shreya is already a singing sensation to be recognized with in an industry of constant competition.
She has lent her melodious vocals for many current day actresses – some prominent ones being Aishwarya Rai Bachchan, Rani Mukherjee, Vidya Balan amongst others.
Bollycurry hopes the birthday girl celebrated her day in style, and wishes her continued success in future endeavours!