Madhuri Dixit, the Dhak Dhak girl who ruled a million hearts with her infectious charm and elegant dancing, enters a new phase in her life as she turns 45 on May 15. 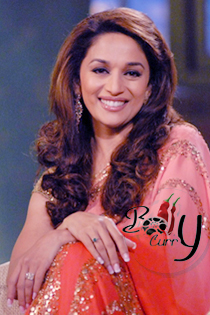 The actress, who has starred in over a 100 films, has always been appreciated for her role in every movie whether in a lead or a side role. She has 5 Filmfare awards to her credit, including a Best Supporting Actress Award. In 2008, the talented actress was also honored with a Padma Shri for her contribution to Indian Cinema.

There was no looking back for the diva as she continued to prove her acting prowess and received critical acclaim with her films such as Mrityudand (1997), Pukar (2000), Lajja (2001) and Devdas (2002).

In 1999, Madhuri married Dr Shriram Madhav Nene at the peak of her career, and went on a hiatus to enjoy  marital bliss. After being a proud mother of two children, she made her comeback with Yash Raj film's Aaja Nachle, in 2007. Currently, fans are eagerly waiting for her next flick, Dedh Ishqiya.
BollyCurry wishes Madhuri Dixit a very happy birthday and looks forward to her upcoming project.
Author: Mayu.
Editors: Shareen M. & Gunai M.
Graphics: Shareen M.
37 Likes