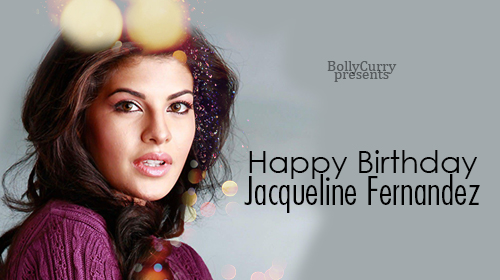 Today, BollyCurry celebrates the birthday of a beautiful starlet, one who has slowly and steadily made her way to the big league - Jacqueline Fernandes.

Born on 11th August, 1985, in Bahrain to a Sri Lankan father and Malay-Canadian mother, Fernandes is the youngest of four children. From a young age, she nurtured aspirations of becoming an actress. She turned to modeling in her teens and hosted several television shows in Bahrain. Winning the prestigious Ms Sri Lanka Universe pageant in 2006, she went on to represent the nation in the Ms Universe pageant that the same year.

Fernandes made her entry in Bollywood with ace director Sujoy Ghosh's Aladin (2009), which unfortunately sank without a trace. More disappointment followed as her next film Jaane Kahan Se Aayi Hai (2010) also befell the same fate. She got a break through an appearance in the song "Dhanno" in the movie Housefull (2010), that helped her shed the 'cute girl next door' tag. She transformed into the bold actress we love with her sizzling performance in Murder 2 (2011) opposite the suave Emraan Hashmi, which gave her the first taste of box office success. Her next outing was in the film Housefull 2 (2012), which turned out to be a super hit, followed by a role in the equally successful Race 2 (2013). However, her biggest movie as a lead actress was opposite Salman Khan in the 2014 blockbuster Kick. The film and the songs were highly popular with the masses and established Fernandez as a force to be contended with.

Though her latest release Roy (2015) tanked miserably at the box office, its songs ruled the charts for months and helped propel her popularity to new heights. Her upcoming flick, Brothers, opposite Akshay Kumar, is slated for a release later this month and has already created a lot of buzz. She has a long list of both Bollywood and foreign projects lined up, in which she will be seen sharing screen space with industry stalwarts such as Amitabh Bachchan and Jackie Chan, and also with rising stars Varun Dhawan and Tiger Shroff.

Fernandes has already won many accolades during her somewhat short Bollywood career, starting with her first film for which she won many Best Debut (Female) awards in ceremonies like the IIFA and Stardust. In addition to being appreciated for her acting prowess, she has also been awarded for her commendable fashion sense as evidenced by her 2015 Style Diva win at the Stardust Awards.

Despite tasting success in Bollywood, she still continues to model and recently appeared in a commercial opposite Aamir Khan for Titan, and has also been a brand ambassador for HTC One mobile phones. Besides being heavily involved in the world of glitz and glamour, Fernandez is also a passionate animal rights advocate and has worked closely with animal rights organization PETA, championing many worthy causes.
BollyCurry presents you with a playlist of some of her most popular songs to celebrate this occasion:

1.      "Aapka Kya Hoga (Dhanno)"  -  Housefull
2.      "Aa Zara"  - Murder 2
3.      "Lat Lag Gayee" - Race 2
4.      "Jumme Ki Raat" -  Kick
5.      "Chittiyaan Kalaiyaan"  - Roy
This Sri Lankan beauty has always remained close to her family and after calling it quits with director Sajid Khan, has stated her desire to start a family of her own sometime in the future. With an impressive array of highly successful works already in her kitty so far in her acting career, Fernandez seems poised for more success with several exciting films lined up. We, at BollyCurry, wish this stunning actress many happy returns of the day!
Writer: Aishwarya S.
Editors:  Ritchelle C. and Gunia K.
Graphics: Saraa K.
Have a suggestion or comment for BollyCurry? Drop us a PM at BC_Dropbox today!

+ 3
5 years ago She is so pretty..
Happy birthday Jacqueline..

+ 6
5 years ago Sri Lankan girl made good! All the best Jacqui, and happy birthday!