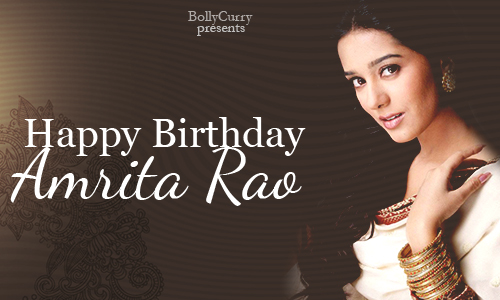 17th June marks the birthday of a beautiful, sweet, and humble actress. The answer is quite obvious as to whom we refer to, considering how the synonyms are endless for her. Today, BollyCurry celebrates the birthday of the gracious Amrita Rao who flips the next page of the book called "Life".
Rao hails from a Konkani family; she was born in Karnataka but raised in Mumbai where she graduated from Sophia College with a bachelor's degree in Psychology. Rao has a younger sister, Preetika Rao, who has also made a mark for herself in the entertainment industry with the popular Colors TV show, Beintehaa.
Rao first began her career with the Fairever Face Cream advertisement which opened the door for her to star in countless others. She made her debut in the acting world through Alisha Chinai's music videos. This brought her to the limelight and gave her the much needed attention of the big-wigs of Bollywood. The actress debuted into movies with the film Ab Ke Baras (2002) opposite Arya Babbar, but it was her role in Ishq Vishk (2003) opposite Shahid Kapoor that shot her to fame. She then went on to star in many movies such as Masti (2004), Main Hoon Na (2004), Vivah (2006), Welcome to Sajjanpur (2008), Jolly LLB (2013), and Satyagraha (2013).
On her birthday, here is a small compilation of some of the most listened songs from her movies:
From BollyCurry and all her fans, here's wishing this lovely actress a very happy birthday and all the best for all her future projects!

Writer: Shreya S.
Editors: Harjot D. and Jenifer A.
Graphics: Saraa K.
Do you have a suggestion or comment for BollyCurry? Drop us a PM at BC_Dropbox today!
2 Likes