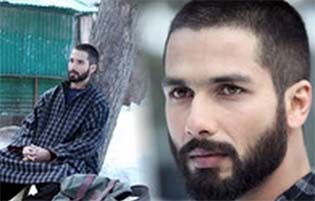 Actor Shahid Kapoor, who plays a dark character in his forthcoming film "Haider", says although he prepared for the role the nagging thought that he's not "good enough" for it kept haunting him throughout the shoot.

An adaptation of William Shakespeare's tragedy "Hamlet", the film, directed by Vishal Bhardwaj, is set against the unrest in the Kashmir valley and revolves around a guy called Haider who wants to avenge his father's death.

"This is one role that makes you feel very inadequate as an actor," Shahid said here Tuesday at the trailer launch of the movie.

Apart from other things, the 33-year-old actor even shaved off his head to get under the skin of the character.

"Every day when I was on the sets, the inherent feeling I had was that I don't think I am good enough to play this role. That's what I felt everyday and I used to keep running to everybody for assurance right from Vishal sir to Pankaj, our cameraman, because this is that kind of role.

"So one prepared to whatever degree that one can, but it did make me feel inadequate as an actor," he added.

But he thanks his co-stars and the director for their support.

"It was very difficult to prepare for the role, but I had support from some fantastic actors and that really helped me a lot," said Shahid, whose last releases include "Mausam" and "R...Rajkumar".

"Being in the same frame with actors like Tabu, Kay Kay Menon and Irrfan sir was a huge learning experience for me. It gave me a lot of confidence about the product that we are trying to create," he added.