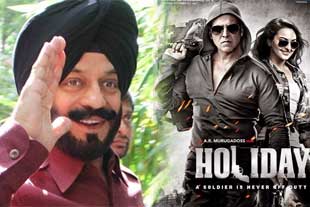 Maninderjeet Singh Bitta, chairman of the  (AIATF), had tears in his eyes after watching Akshay Kumar and Sonakshi Sinha starrer "Holiday - A Soldier Is Never Off Duty".

At a press conference here, Bitta Wednesday said he is impressed with the hard work that the actors have put into the film which reflects the uneasy relation between civilians and security forces.

"I have seen it all -- bomb-blasts, guns, bullets, and I never had tears in my eyes because of pain. But after watching the film and seeing the hard work done by Akshay Kumar and Sonakshi I could not stop my tears," Bitta told reporters here.

Bitta is seeking tax exemption for the film, and wants it to reach everyone, irrespective of age and class.

"The biggest task is to take this film to one and all, to each and every student of the country. Everyone should be able to watch the film and it should be made tax-free because the film is capable of making people aware of global terrorism and their duty to the nation," said Bitta.

"In a country like India, one might have to take rebirth to create such an awareness against terrorism which this film can do. People of all age groups should watch this film," he added.

Directed by A.R. Murugadoss, "Holiday - A Soldier Is Never Off Duty" is set to release worldwide Friday.

The film is presented by Reliance Entertainment and produced by Vipul Shah.