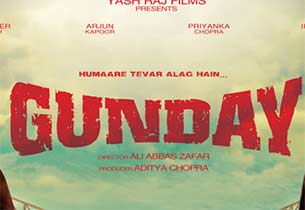 The trailer of Yash Raj Film's "Gunday" impressed the audience at the decennial edition of the Dubai International Film festival (DIFF). The launch was attended by the film's cast Ranveer Singh, Arjun Kapoor and Priyanka Chopra as well as the director Ali Abbas Zafar.

The trailer launch was followed by an 'In Conversation With Gunday' session between the cast and the director where they spoke about the making of the film.

The film's trailer gives a clear glimpse the rustic look of its actors, rugged settings equipped with power packed dialogues and action sequences. Priyanka, in her elegant yet raw avatar of a cabaret dancer, fits well in the love triangle which is reflected clearly through the trailer.

Based in Calcutta during its most unsettled times in the 1970s, the film shows the changing face of friendship.

exclusive
Exclusive Barun Sobti on being away from TV: My problem is the ...
12 minutes ago

exclusive
Exclusive Jaan Kumar Sanu on keeping up with Bigg Boss 13, looking up ...
29 minutes ago

Subuhii Joshii loses weight all by herself
36 minutes ago