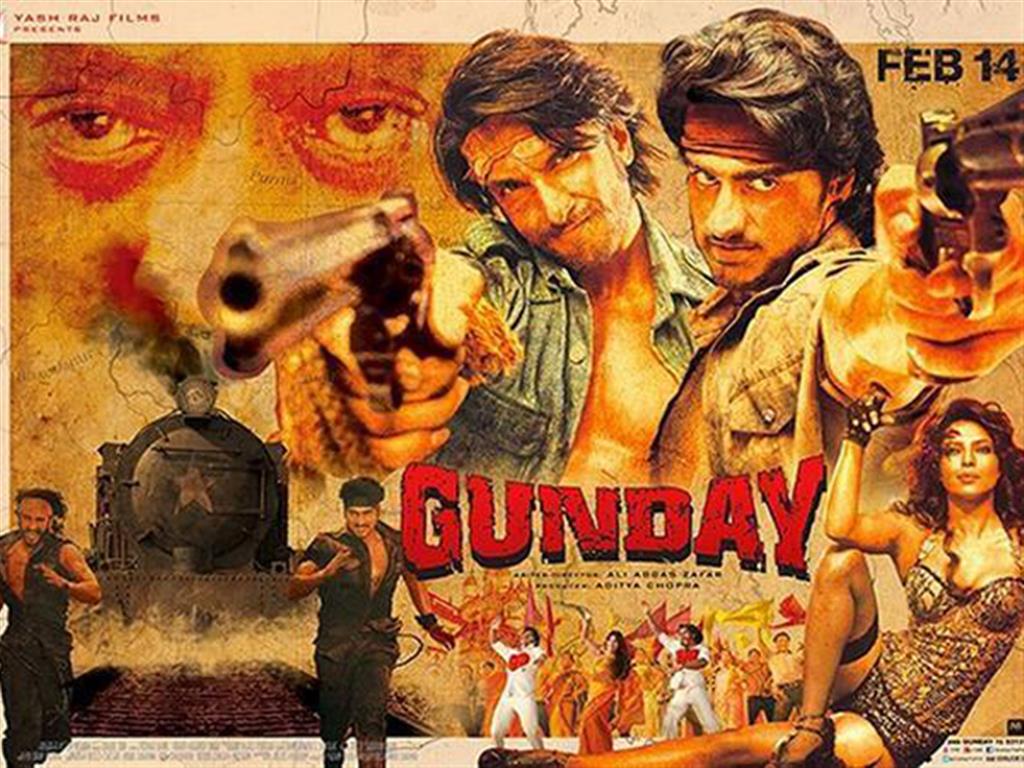 Seriously, this is the funniest Yashraj film in the distinguished banner's range of existence. Tragically the humour is mostly unintended. Like the gaffes and boo-boos that litter the decked-up garbage masquerading as a pseudo-historical depiction of Bangladeshi migrants in Kolkata post the 1971 Bangladeshi war of liberation .

Two boys, Bikram and Bala, crawl across the border into Kolkata and become some kind of messianic outlaws. Shamelessly, the film glorifies a life of crime to a level of embarrassing exultation until we see the two "heroes" constantly on the run from the "the law" (as represented by the insanely sane and sensible Irrfan). 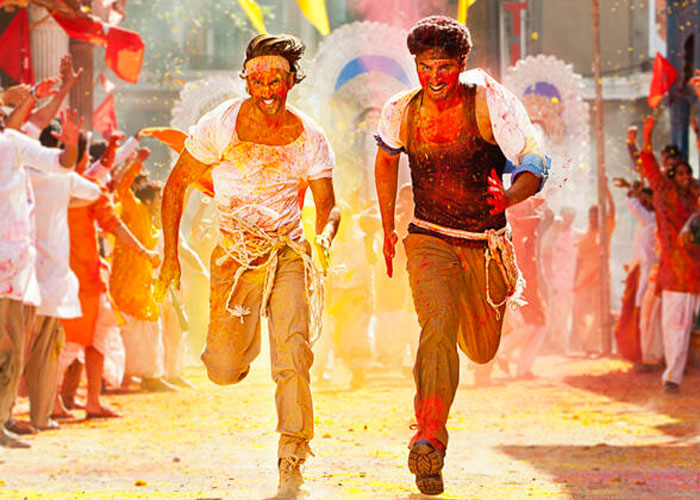 But Bikram and Bala, who grow up to be two blobs of brainless brawn played by Ranveer Singh and Arjun Kapoor, are no ordinary criminals on the run. They run in slow-motion sometimes shirtless most time brainless, their biceps and 6-packs glistening in hairless glory. They are the Milkha Singhs of the internet generation, meant to eulogize wanton materialism by flaunting their physicality without inhibition or reservation.

They are the greedy generation from before greed was invented.

"Gunday" is the kind of subverted cinema that reduces every incident, historical or fictional, to a dramatic distress. After the fairly impressive opening that seems to be shot and edited by a different director, there's no narrative structure, only a series of clumsily punctuated episodes meant to spotlight a kind of heightened yearning for a life freed of moral expectations and obligations.

The two heroes think they are cool when in fact the script highlights their stupidity in the clumsy conflicts of interests when they fight. Shirtless, of course. Chests waxed in the 1970s when wax was used only to make idols. 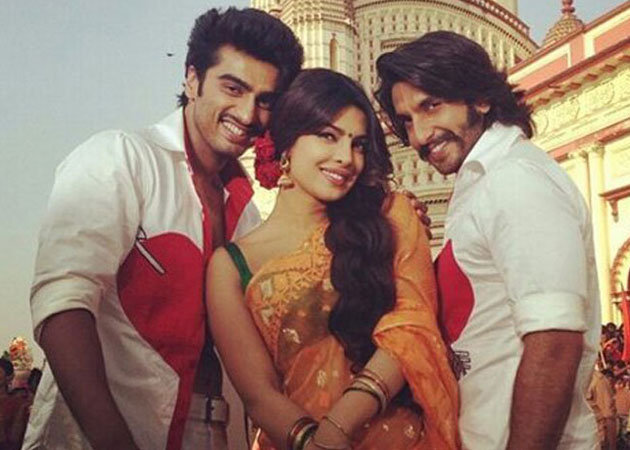 A major portion of the narrative is devoted to the triangular courtship with Bikram and Bala wooing Kolkata's hottest cabaret dancer (who isn't what she seems, but shhh!). Nandita(Priyanka Chopra) first meets her two sleazy suitors in a loo when they have their dhotis hitched up to their thighs to relieve themselves.

Yes, you heard right. That's acme of below-the-belt humour in this downright absurd and offensive crime drama. Priyanka Chopra's character is party a seductress partly Mata Hari and wholly preposterous in trying to be many thing in a script that isn't sure of what it wants to be.

Just why an actress of Priyanka's calibre should agree to be part of a film so wobbly and weird is beyond comprehension. Perhaps she really saw this film as an authentic chronicle of the wages of the Bangladesh war. There is no end to how optimistic an actress can get when she puts her heart where her mind should be and mistakes kitsch for art.

As for the two leading men it's a toss-up between Ranveer Singh and Arjun Singh as to who hams it more to the flashy finale where they both make a desperate run for their lives while we do the same in our own far less exciting world outside the ridiculous realm that this artificial film, lit up with fake bonhomie and bogus bravura, tries to create for our entertainment.

This is not the first time this film's director has made a royal hash of a potentially promising premise. He had messed up big-time in "Mere Brother Ki Dulhan". The damage done in "Gunday" is far more ominous and dangerous. It extols the illicit presence of across-the-borders migrants and attempts to sanction them with a kind of legitimacy, much in the same way that the film tries to glorify the two scummy protagonists as heroes of our times, rather, their times.

The film unfolds in Kolkata circa 1973. Periodicity is showily generated through a poster of the Big B's "Zanjeer" here and a snatch of R.D. Burman's "Keh doon tumhe ya chup rahoon" from "Deewaar" there. Beyond these the film doesn't make any pertinent point of periodicity. 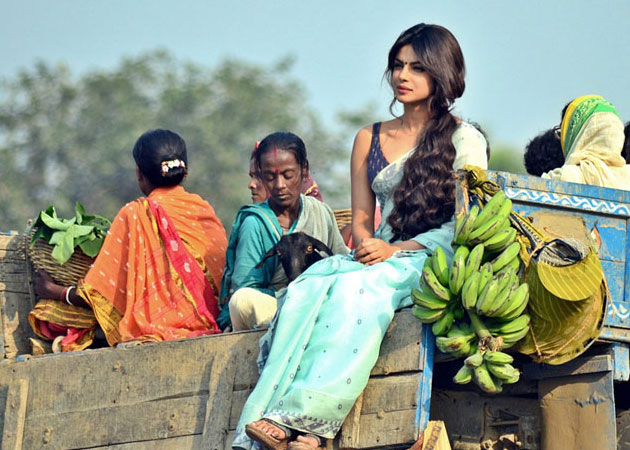 Of course there Priyanka's low-cut blouses ending many inches above her waist in a neat bow.

Alas, Priyanka's blouses are the only neatly tied-up component in this anarchic world of guns goons, guffaws and gaffes. If I was a Bengali I'd be seriously offended by the loud caricatural ambience created in the name of Bangla culture. Of course the Howrah bridge looms up on location and as studio-props every once in a while. But the astounding amount of garish colours that Anil Mehta's cinematography is compelled to shoot just numbs the senses.

The dialogues range from the strange to the very strange. At one point while killing a friend-turned traitor Arjun Kapoor(making more faces in every frame than Sridevi did in her entire career) says, "Never trust a Bengali who doesn't like football."

"Gunday" is a dumbed-down version of Yash Chopra's classic "Deewaar" where the boy from world of poverty grew up to a life of glamorized crime. There was strong matriarchal figure in "Deewaar" frowning deeply in disapproval of the anti-hero's anti-heroic antics.

In "Gunday", there are no moral obstacles as Bikram and Bala whoop it up in orgiastic rituals of disorganized crime. There is only the very talented Saurabh Shukla looking embarrassed uncertain and defeated trying to tell the heroes they've lost the plot. He probably saw what the makers of this film couldn't.

"Gunday" wastes acting talent as though it was available at discount rates. The very talented Victor Bannerjee and Pankaj Tripathi show up in walk-on parts and are hastily packed off to focus on the two studs on steroids in the 70s slithering in slippery motions across the railway tracks stealing koyla from the carriages.

Irrfan's voiceover tries to keep the plot together. Brilliant actors have their limitations.