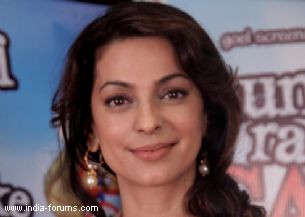 Actress Juhi Chawla plays a negative character in Anubhav Sinha's production venture "Gulaab Gang" and says she was surprised by the makers' confidence in her to pull it off.

Based on a woman's grit and determination, the film sees Madhuri Dixit in the lead while Juhi will be seen as an antagonist. Directed by Soumik Sen, it also features Mahie Gill and Tannishtha Chatterjee.

"'Gulaab Gang' is a very interesting film. I was startled when I heard the script because first of all it was a very strong film and the second thing was my negative role in it. I was like, 'What has happened to the director and producer that they want me for the role? How did they think that I can do the role?" Juhi said in an interview.

"But when I gave it a thought and talked to them, I liked it and thought it would be a different experience for me if I will do it," added the star of films like "Darr" and "Hum Hain Rahi Pyar Ke".